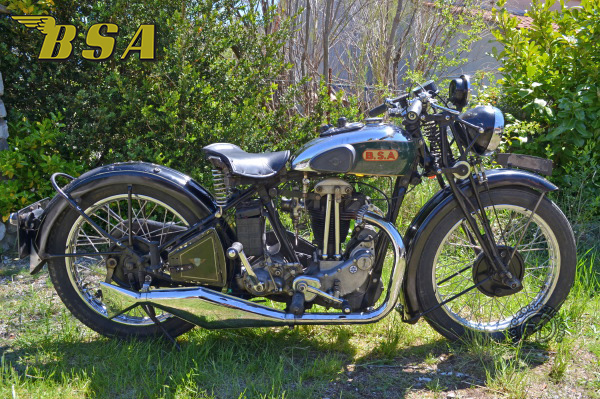 A star is bom

For nearly 60 years, BSA was Britain's biggest motorcycle manufacturer. Its output during the 1930s was of mind-boggling complexity, with a range of overhead-valve singles from 150 to 600cc. All the variants between 250 to 500cc were derived from the famous Blue Star designed in 1931 by Herbert Perkins and were destined finally to evolve into some of the most celebrated of all British sporting singles. Called the Empire Star first, and then, after a complete redesign of the engine by Val Page, the Gold Star.

Origin of a Famous Species

The famous series began in 1930 with a 250 that launched BSA's new vertical single with twin exhausts and their double-cradle frame. In 1931 came the first Blue Star, a 350 single, followed the next year by a 500 with a four-speed gearbox and a new type of frame in which the cradle tubes were bolted to an upper beam of forged steel.

The 350 took advantage of the change to swap its engine dimensions of 72x85mm, used since 1924, for 71x88mm, allowing a degree of standardization with the 85x88mm 500. The entire range was based around these new models, of which only the sports versions carried the name "StarÂ”. Externally identical to the standard models, they had the same superb finish in British racing green and chrome. High-level exhausts were optional on Stars only. The Blue Stars had far superior performance thanks to high-compression pistons, high-lift cams and carburetors with accelerator pumps.

For 1933, the 350 Beezas gained new engine dimensions and a four-speed gearbox with the option of a foot-selector instead of the traditional tank shift lever.