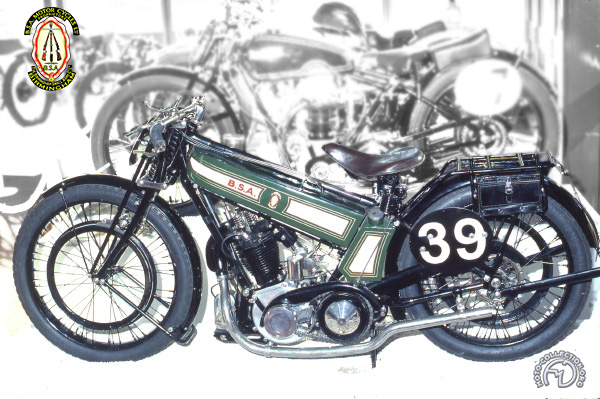 Even the biggest factories can come unstuck building racing bikes, and when BSA Â– aiming to resume production after WWI (from which it had made a handsome profit) Â– attempted to enhance its image by competing in the most famous race in the world, the Isle of Man Senior TT, it experienced a humiliating setback.

Too Much, Too Soon

For a start, BSA had never built anything except stolid side-valve machines. Its aim was to enter racing through the front door, and it attempted too much, too soon. Developed in its Redditch factory, the racer had nothing in common with any BSA which had gone before. Its slightly inclined single-cylinder engine had parallel overhead-valves, an aluminum piston and a twin-choke BSA carburetor on a strange intake pipe, which bent sharply backwards.

The frame, obviously inspired by those of Cotton and Scott, was made up of straight tubes, which linked the steering head to the rear wheel spindle, with the tank mounted between the tubes. The exhaust system was a curious one-into-two layout: An inverted

"Y"-shaped aluminum manifold led into twin down pipes passing either side of the chain-driven magneto. Out of the six bikes which started (fourteen had been built), not one finished the race. All were eliminated by mechanical problems Â– piston seizures Â– or

crashes, some caused by the thoughtless juxtaposition of the brake and oil pump pedals beneath the rider's right foot!

The 1921 BSA Tourist Trophy racers had nothing in common with the marque 's road-going bikes; the unusual frame design was more like that of the contemporary Scott.