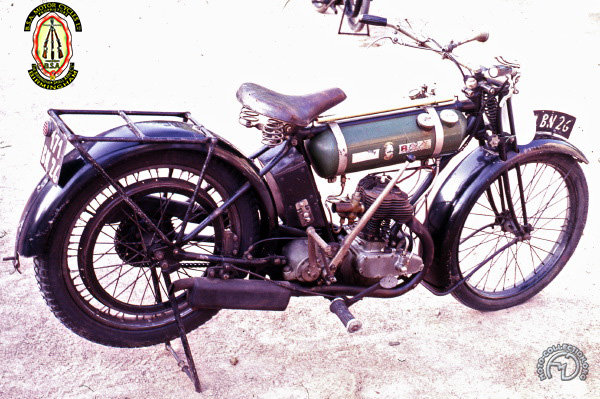 In the 1920s, the British motorcycle industry roared ahead: registrations peaked in 1928 at 721,000, a figure that was not exceeded until the 1950s, and the industry was turning out some 750,000 units a year. BSA Â– the most popular marque – enjoyed tremendous success and much of that success was due to this handsome little bike, the legendary "Round-Tank" Model B Lightweight.

It was designed by Harry Poole, who worked in a branch factory of BSA, and it became one of the most popular bikes for everyday use in the 1920s. Public servants like telegraph boys rode Model Bs on their rounds, and a whole generation learned to ride on Round Tank Beezas. It was the Honda 90 of its day and 35,000 were built in three years.

The Round Tank was not just a "round the houses" runabout: in 1924, two Model Bs climbed the highest mountain in Wales Â– Mount Snowdon Â– in company with a couple of 350 sports machines. The Round Tank held its own Â– one of them climbed to the 3560 ft summit in 30.55 minutes! Economy showed in the braking system. Both hand and foot brakes worked on the rear wheel because, while the law said that motorcycles must have two independent brakes, it neglected to say that they should be on separate wheels. Eventually there were two-wheel brakes, and the Model B de luxe gained a three-speed transmission, too. In 1927, the famous round tank gave way to a saddle tank. It might have been progress, but the old Model B was missed.

The production of 35,000 Round Tank BSAs from 1924 to 1927 established the company as a provider of no-nonsense everyday motorcycles.