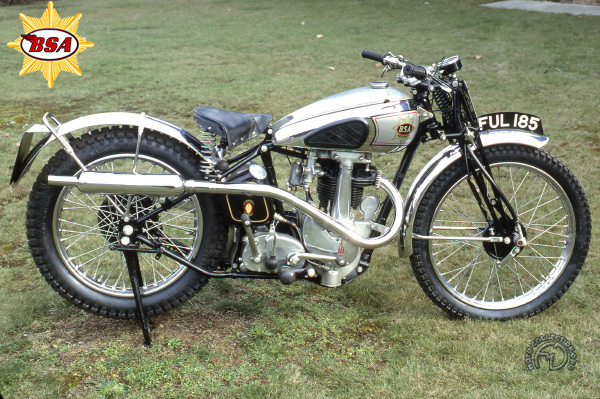 Star for a season

The new range of BSA sports singles debuted in late 1938, but production was halted in 1939 when the factory switched to military materiel such as its side-valve M20 500.

The top of the 1939 BSA sports range was the M24 Gold Star. It took its name from the exploits of Wal Handley (who was also a BSA dealer), who returned to the track by lapping Brooklands with the prototype at 107.6 mph, winning the "Gold Star," awarded by the British Racing Motorcycle Club to any rider making a lap at over 100 mph. The BSA Gold Star had an aluminum engine, but the more affordable Silver Star 250 B21, 350 B24 and 500 M23 had cast-iron cylinders and heads.

The B25 Empire Star trials 350 was sold ready to compete and was one of the most sought-after mounts for the popular one-day trials in Great Britain. The engine retained the bore and stroke measurements traditionally used by BSA, but the engine internals were polished and a healthy 18 hp resulted. The cast-iron cylinder and head underwent special treatment, and consequently, specific piston rings had to be used. The four-speed gearbox incorporated a high fourth for use in the zones between trials stages and an ultralow first so that the machine could haul itself out of the impossible quagmires that constituted one of the most recurrent trial hazards. The B25's frame was made of Reynolds 531 tubing, and the bike was sold with lighting (normally removed for trials) and high-level exhaust system.

The B25 Empire Star 350 was only built during the 1939 season, and this superbly restored example is possibly the sole survivor.