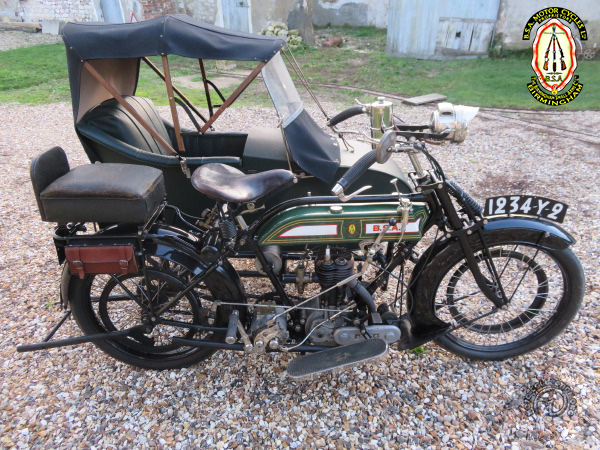 This BSA single and sidecar were sold as a Small Arms Company was founded in the 1860s to make rifles for the British Army, and had begun making cycle components when a time of peace caused profits to slump.

It was not until 1910 that BSA built its first motorcycle, a side-valve 500cc single with direct-belt drive, launched at the Olympia Show in London at the end of the year.

The bore and stroke of that first BSA was 85x88mm, and it was soon joined by a 557cc derivative with the stroke increased to 98 mm. Catalogued as a sidecar machine, this motorcycle was sold with a BSA-built sidecar. Whereas most manufacturers still offered woven wickerwork sidecar bodies, the BSA "chair" was astoundingly modern, with metal panels over a wooden frame. In 1914, this 4.5 hp 557cc model cost around $90 in addition to the $30 for the sidecar (windshield and top included). The 4.5 hp BSA was fitted with an extremely modern three-speed gearbox with small metal clutches between the gears acting as a primitive synchromesh, which allowed the gears to be changed in a single motion without using the foot clutch. The final drive was by belt.

Purchased by its original owner in October 1914, this side-valve BSA is still attached to its original BSA "No 2" sidecar and was discovered in a warehouse where it had lain forgotten for 42 years.