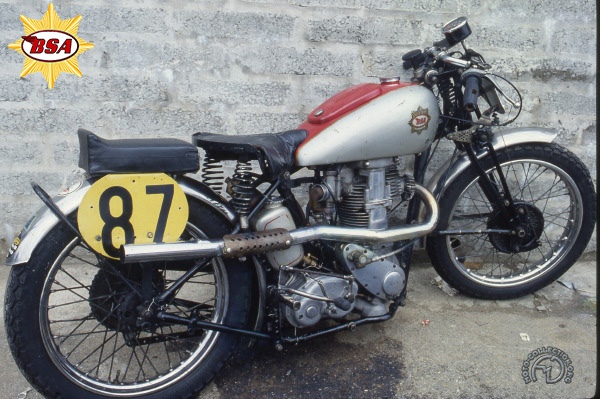 The star of Brooklands

In June 1937, the regulars at the Brooklands track southwest of London Â– whose slogan was "The right crowd and no crowding" Â– were surprised to see recently-retired Grand Prix star Wal Handley riding a specially prepared BSA 500 Empire Star running on alcohol.

Until then, the Birmingham giant had shown little interest in competition (after its disastrous showing in the 1921 Isle of Man Tourist Trophy), but the new bike allowed Handley to win at an average of 102.27 mph, earning him the coveted "gold star" awarded to riders who had lapped the celebrated banked oval at over 100 mph. BSA adopted the name for its new sports models.

Unlike Handley's prototype, the production Gold Star M24, launched in 1938, benefited from an aluminum cylinder with an iron sleeve and a cylinder head with screwed- in valve seats. Its designer Â– Val Page Â– paid great attention to weight-saving, employing light alloys wherever possible. He even used magnesium for the gearbox shell on pre-1939 models. The new Gold Star proved fast and reliable and quickly demonstrated its ability as an all-round sports bike. The British Army team used Gold Stars in the 1939 ISDT in Germany, and after WWII, Gold Stars won many trials, motocross events Â– John Draper was Motocross Champion of Europe in 1955 on a works Gold Star Â– and national races.

Shown here in its 1938 form, the BSA Gold Star was one of the most remarkable sports bikes of the immediate pre- and post-WWII era.