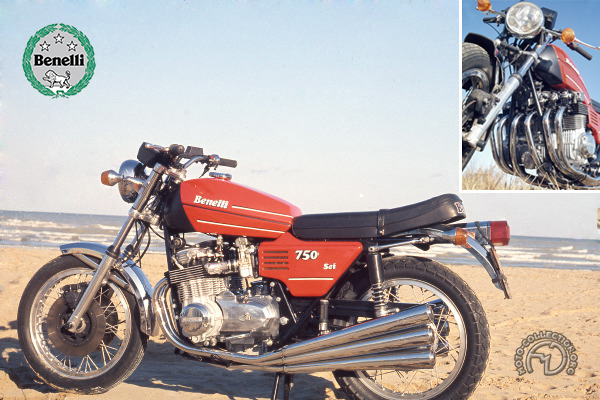 "The Italian motorcycle industry, hard hit by the crisis of the Sixties, was just getting back on its feet at the beginning of the Seventies when the Japanese invasion hit Europe. It was a rude shock for the surviving Italian companies, and it wasn't until the end of the Eighties that Italian motorcycles began to reappear as a real force.

But one Italian group wouldn't admit defeat. Beneffi-Guzzi, two legendary Italian firms that had been combined under the control of Alejandro de Tomaso, attempted to defeat the Japanese at their own game. Benelli produced a series of models based closely on the Honda Four.

The Ferrari of Motorcycles

In 1973 Benelli stole the motorcycle shows with the 750 Sei," the first series-production six-cylinder motorcycle. It was followed in 1975 by a 500cc four, then a 350 and, in 1980, by a 250 - the smallest four on the market. But this Italian challenge was a total failure as far as the fours were concerned. The Benellis skimped on detail too much to compete with their Japanese rivals. The 250 was too expensive, and survived only two years. The "Sei," which had enjoyed a relative commercial success and had been upgraded to 900cc in 1978, appeared for the last time at the 1986 Bologna Show. That year Benelli offered 12 models and sold only 5000 bikes. Of these, 666 were exported.

The original version of the Benelli "SeiÂ”, with its six aggressive exhaust pipes and their paralyzing roar, is today a highly sought after classic bike.