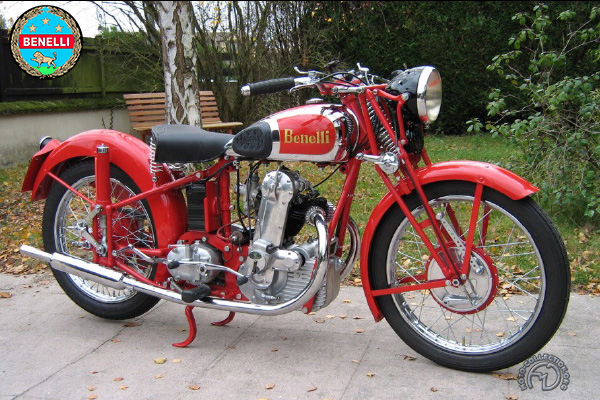 In 1927, the marque run by the six Benelli brothers achieved racing fame with a 175cc machine whose single overhead-camshaft was driven by a train of gears. Twin overhead-cams appeared on the works racers in 1930. Eventually, the displacement was increased to 250cc. Successive developments of this basic design were still racing in 1961!

Racing success brought commercial success, and Benelli began marketing competitively priced roadsters closely based on their racing bikes and distinguished by the highly polished tubular housing for the vertical drive to the camshaft. They even built commercial-delivery tricycles powered by this prestigious engine, an extraordinary sight when most four-stroke engines on the market were rustic side-valve units.

The Gran Sport 175 was intended for privateers, and Benelli began applying its fine technology to production bikes. In 1933, the company launched an overhead-cam 500 with a four-speed gearbox, followed in 1934 by a 250 with a four-speed hand-shift transmission. From 1936, customers had the option of rigid frames or Benelli's excellent swing arm rear suspension. This superb range of overhead-cam machines remained in production until1949. In 1941, the line-up consisted of no less than six 250s: the black-enameled 4TN Turismo with a choice of rigid or sprung frames (60-65 mph); the red-enameled Sport 4TS, again with or without rear springing (70-75 mph), the Sport 4TSSE (93 mph) and the 4TNF delivery trike.

Many manufacturers would have been proud to have such a competition-bred machine as this 250 Benelli Turismo in their catalogue.