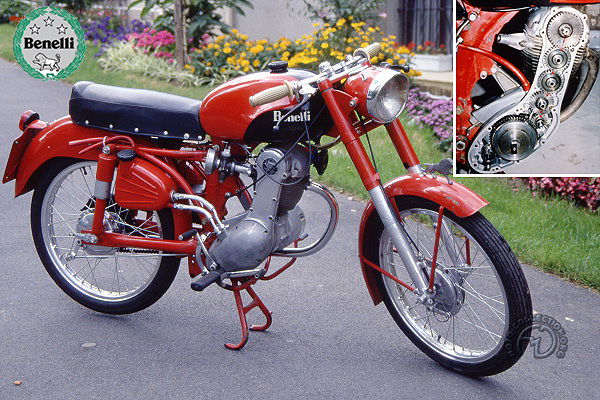 Look for the little lion

The Italians are unbelievable! The engineers of that country have the art of making machinery look like sculpture, and Benelli was a master of the craft. Skilled at building single overhead-camshafts driven by a train of gears, in 1958 the Pesaro-based marque unveiled the Leoncino ("little lion"), whose name was celebrated by an aluminum mascot mounted on the front fender.

Italy in the Fifties was awash with technology, and competition among makers of lightweight bikes was fierce. It was a bitter blow when one of the 13enelli brothers, Giuseppe, left the family firm in 1950 to launch his own "Motobi" marque. Built with two-stroke or overhead-valve four-stroke engines, the Motobi began a worldwide vogue for egg-shaped engine/cylinder units.

Benelli could hardly remain indifferent to the challenge, and responded in 1956 with the Leoncino. Fashionably egg-shaped, the engine unit was distinguished by a novel 45-degree layout. The crankcase was prolonged by a polished aluminum casing covering the camshaft drive, virtually the signature of the marque. In parallel, Benelli also built on the same bottom end a two-stroke engine intended for two tamer Leoncinos, developing 5.5 hp at 5500 rpm and even a tri-carrier. The elegant overhead-cam Leoncino was sold in "Normal" (6 hp, 56 mph) and "Sport" (7 hp, 65 mph) versions. Too costly to produce and not a great deal faster than its classmates, it was replaced in 1959 by a more conventional overhead-valve model.

Shown here in its "Normal" version, the Leoncino had a single overhead-cam driven by a train of gears like a racing engine.