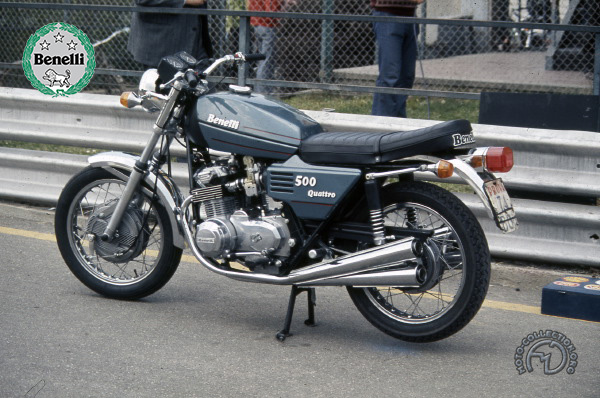 In the 1970s, two of the most famous Italian marques Â— Moto Guzzi and Benelli, which had come under the control of the Argentine-born Alejandro de Tomaso Â— attempted to counter Japanese technology with a new range of bikes. It was a bold venture that would seriously damage the financial health of the de Tomaso group.

From its blown 250 in 1939 to Pasolini's 350 in 1974, via the World Champion machine ridden by Carruthers in 1963, Benelli had been one of the leading pioneers of the transverse four in Italy, along with Moto Guzzi, Bianchi, Gilera and MV Agusta.

However, Benelli now committed the fatal error of not being true to its image by producing a 500 that was a dead ringer for the Honda. lt had the same bore and stroke, the same layout with a single overhead-camshaft and primary transmission by internally-toothed silent chain, the same general design of crankcase and chain covers Â— and even an identical performance, although Benelli claimed 7 hp and 800 rpm more than the Honda. Of the entire Benelli-Guzzi multi-cylinder range, only the more original 750 Sei enjoyed any success. The others, faithful copies of the equivalent Hondas, sold mainly in Spain and Italy, where there were severe curbs on the imports of Japanese motorcycles. Despite some reliability problems, these Benellis gave the impression that their maker had taken a lot or trouble over the level of finish.

In its early years, the 500 Quattro did not have disc braking. Picture shows the 1974 model.