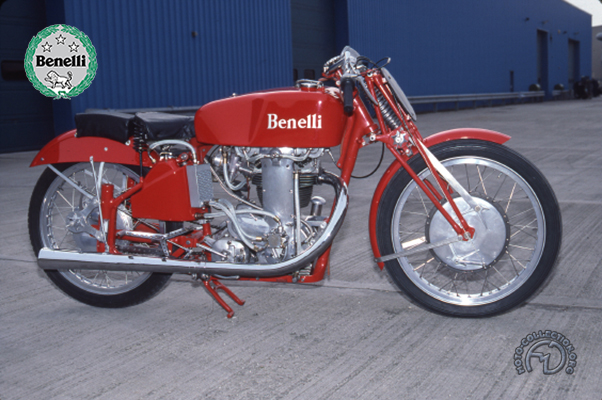 Benelli made its racing debut in 1923, with a standard 125 bored out to 150cc and specially reworked for Tonino, one of the six Benelli brothers, to race in the 175cc category.

Benelli took a major step forward in 1927 by building an overhead-cam 175cc four-stroke designed by Giovanni Benelli, on which Tonino dominated his category in Italy that year. Tonino and his 175 Benelli again won the Championship of Italy in 1928, 1930 and 1931. The racing team contested international races in which the 175 won the Swiss GP in 1931, then the Dutch TT and the French and Belgian GP. Late in 1934, the Benelli brothers, encouraged by these successes, began the construction of new 250 and 500 singles.

In 1935, the factory announced (with a certain degree of optimism) that the 85x87mm 494cc single would develop 50 hp and reach 109 mph. But its rider, Guglielme Sandri, was unable to prevail against the V- twin Guzzi. The 500 underwent a far-reaching program of modification for the 1938 season. Unlike Norton, which had just reduced the stroke of its Manx, the most expensive racing 500 of the period, Benelli adopted a longer, 101mm, stroke. The 1938 model 500 also had a complex swing arm rear suspension using coil springs encased in vertical tubes. Unlike the phenomenal 250, the twin-cam Benelli 500 enjoyed only local success; unable to beat the all-powerful Gilera Four, it was dropped in 1939.

With an external oil pump, the engine of the Benelli 500 GP was festooned with pipes carrying oil from the sump to the oil radiator and then to a separate oil tank.