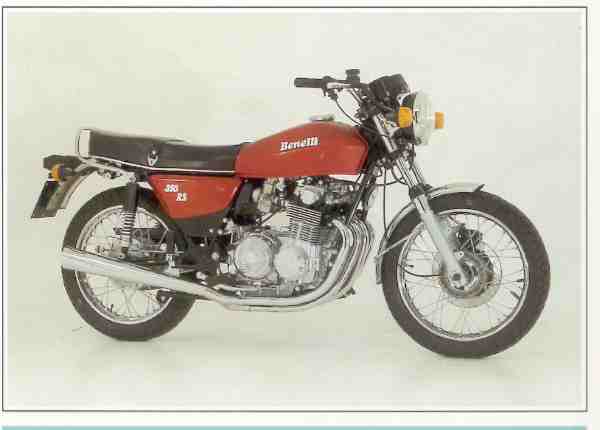 A lack of originality

In 1974, imports of Japanese motorbikes into Italy were still restricted. The Italian constructors made the most of this ban, and the market was headed by the Guzzi-Benelli group. The idea seems to have been to allow the Italian industry to make up for lost time. But it didn't make much difference to the products of the De Tomaso group, which began making a series of "sub-Japanese" two-stroke twins and four-stroke fours.

The biggest mistake made by the group was to copy Japan but forget that Italy then had neither the dealer network nor the infrastructure necessary to justify claiming standards high enough to match the banned Japanese.

It quickly became obvious that the public preferred the real thing. Italian bikes should be made in Italy and Japanese bikes in Japan. De Tomaso had totally overlooked the long history of the marques in his group. lnstead of reviving the magic of the old racing four-cylinder Benellis, this 350 (initially marketed under the Guzzi label) was no more than a faint imitation of a Honda. The Guzzi 350 GTS of 1973 was copied from the Honda CB500 Four (it even had the same primary transmission by internally-toothed Morse silent chain). It only got front disc braking in 1975, was joined by a 400 CTS and lasted until 1977, when, fortunately, it was replaced by the V50 Â— a typical Guzzi. Benelli, which already had the 500 and 750-Six in its catalogue, completed its range in 1976 with the 350 RS, to which was added the 354 Sport in 1979 (eclipsed in 1982 by the 504).

There were only detail differences between the 1976 350 RS and the 354 Sport of 1980, with its alloy wheels, twin front discs and fairing.