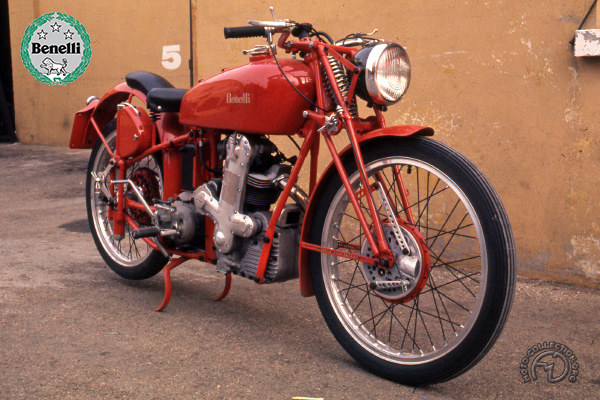 In the early 1930s, Benelli became one of the Italian "Big Five," alongside Bianchi, Garelli, Gilera and Moto Guzzi. In 1934, its renowned overhead-camshaft 175 was uprated to 250cc and given a four-speed gearbox. Of the six models making up the 250 range, the 4 T-SS was the most sought after. This model had been developed for endurance races such as the Milan-Taranto, with a large fuel tank and maximum weight saving, as shown by the heavily-drilled brake drums and anchorages.

A wonderfully typical Benelli product, the 4 T-SS had a power unit that differed from the other versions in the range in having a single exhaust pipe and aluminum cylinder and head instead of twin exhausts and cast-iron cylinder/head construction. There was a little oil radiator mounted in front of the lubricant oil tank on the fore part of the crankcase.

On its right side, a cruciform polished alloy casing concealed the gear-train drives for the overhead-camshaft, lighting dynamo and rear-mounted magneto. Another specialty of Italian bikes in general Â— and Benelli in particular Â— was the rear suspension, offered as an option on all Benellis in 1936. Despite its appearance, it was a swing arm unit, not plunger springing. The sturdy rear frame triangle acted as a guide and rigid support for a lightweight swing arm unit consisting of two springs inside tubes linked to radius arms and friction dampers.