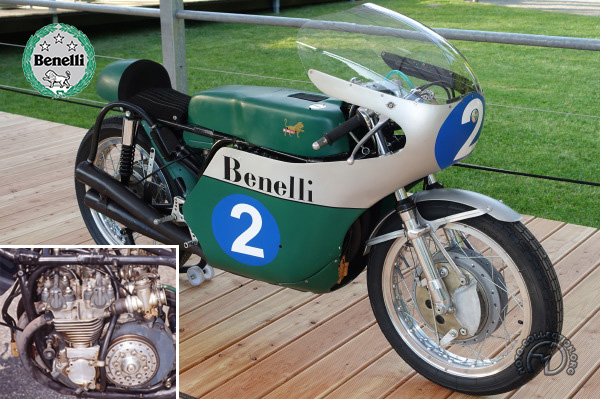 As early as 1940, Benelli unveiled a spectacular supercharged water-cooled 250cc four with an unbelievable performance: 52.4hp @ 10,000rpm and a top speed of 143mph! The outbreak of war and the ban on supercharging brought the project to a premature end but in June 1960, twenty years later, the company from Pesaro unveiled a new 250cc racing four.

Unlike the rival MV Agustas and Gileras (and the 1940 250-4), the new Benelli had near-vertical cylinders. Its open double cradle frame soon gave way to a classic loop frame and, after two years' development, the Benelli started racing in 1962. After winning its first victory in 1964 at Barcelona, the 250-4 distinguished itself in 1965 by winning the Grand Prix des Nations at Monza and by Â– temporarily Â– becoming the first works machine to fit twin hydraulic disk front brakes. Previously it had used a four-cam drum brake controlled by dual levers, which called for skill and a strong right hand. In its original six-speed version, the 250-4 developed 140hp@ 13,000rpm and weighed just under 270 lb.

It was not until the late Sixties that the Benelli-4 really dominated the international scene with first Renzo Pasolini and then, in 1969, Kel Carruthers, who won the world 250cc championship. It was one of only two world titles ever held by Benelli. Ambitiously, Benelli then planned a bizarre 32-valve 250cc V8, but once again the project fell victim to a change in the rules, which restricted 250cc racers to two cylinders.

The 250cc world champion bike was subsequently developed into a 16-valve 350 (inset).