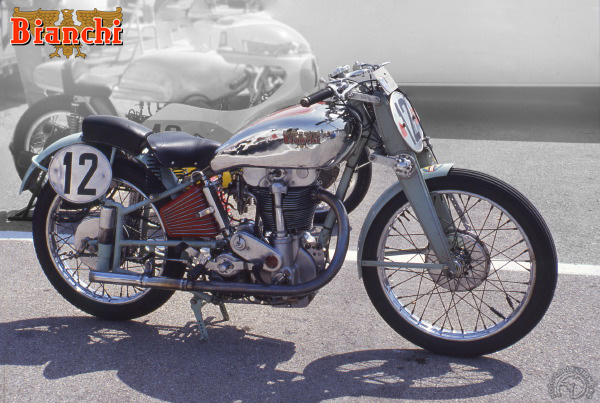 Last gasp of a racing single

It was difficult to produce a worthy successor to the Freccia Celeste. Any new model needed exceptional qualities to match that 350. The 500cc "170" of 1932 came from the pen of the same designer (Mario Baldi) and was, in effect, an enlarged version of the Freccia Celeste, developing 33 hp at 5000 rpm.

Though Tazio Nuvolari had progressed to auto racing, and Amilcare Moretti had been signed by Moto Guzzi, other fine riders rallied round the flag of the new 500, among them Carlo Fumagalli and Nello Pagani. The new bike got off to a slow start, as the frame was not up to the potential of the power unit. But constant development (notably with the "200" of 1934) eventually gave the 500C Freccia Azzurra the winning edge it needed.

In 1934, Fumagalli won the Circuit of Lario. The following year, it went to Dorino Serafini, who had joined Bianchi from Benelli and MM. Serafini also won the 1936 Swiss GP and became Champion of Italy the same season. Sadly, he had to join the rival Gilera company to take the 1939 European Championship, for the normally aspirated single could no longer make the grade, even with Alberto Ascari at the helm, against the increased competition from the Guzzi V-twin and Gilera 4 Rondine. In 1939, Baldi attempted to restore the balance by creating a supercharged Bianchi, but WWII brought the project to a standstill. Sadly, by the time the war was over, Baldi had died and supercharging was banned.