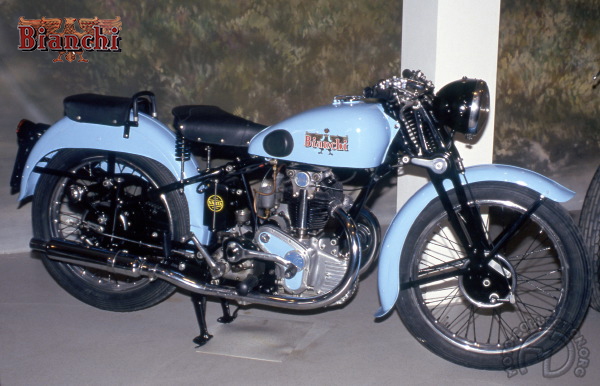 All-Italian to suit the Duce

In the 1930s, Mussolini wanted the national industry to be self-sufficient and to use foreign suppliers as little as possible. Bianchi's loyalty to the regime never faltered, which ensured that his company got plenty of military orders. Therefore, the marque launched the 250 Freccia d'Oro in 1934 to replace the 220 of 1933, which was in turn derived from the 175 launched in 1930. Two versions were proposed: the "T" (touring) at 3800 lire and the "S" (sport) at 3950 lire. The additional 150 lire bought an extra 2.5 hp and twin exhausts.

The Freccia d'Oro ("Golden Arrow") was produced until 1940. Its sales were boosted by governmental encouragement, which enabled a rapid price reduction.

In 1936, it was fitted with rear suspension, while a Dell'Orto carburetor replaced the French Gurtner on the T and the British Amal on the S. The S took advantage of the upgrade to fit a four-speed gearbox, while a Marelli electrical installation supplanted the Bosch. The carburetor and electrics were the final imported elements on this model; Italian components had gradually been substituted for the Best & Lloyd, Bowden, Miller, Pilgrim, Smith and Terry fittings previously used on the Bianchis. A Sport Lusso joined the other two existing Freccia d'Oro models between 1939 and 1942, and was the last civilian machine to leave the factory before it was bombed by the Allies. The Dolomiti and Stelvio succeeded the Freccia d'Oro in 1947.

The Freccia d'Oro S was a typical sports bike of the late 1930s, though the adoption of rear suspension was an advanced touch.