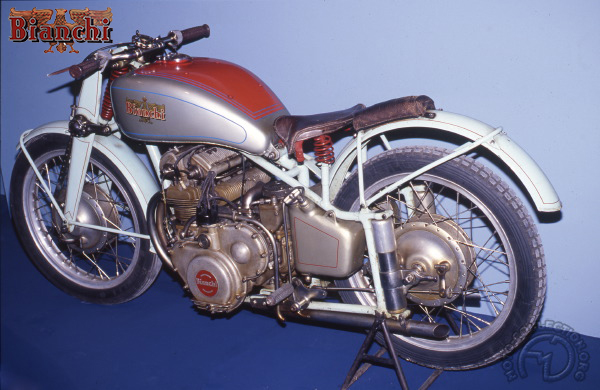 So much started here

From 1924 to 1930, the flagship model of the firm founded by Edoardo Bianchi in Milan in 1897 was a remarkable twin-cam single, the Freccia Celeste ("Sky-blue Arrow"), built in various capacities. Bianchi also built an excellent V-twin, but its outstanding achievement was a transverse four introduced in 1939, which foreshadowed the layout of the modem superbike.

The Father of the Modem Four

The 1939 Bianchi 500 was the star of the November 1939 Milan Show, for its transverse four-cylinder layout was revolutionary for the period; so, too, was the use of a supercharger. It was one of several racing multis which appeared in the late Thirties, using a variety of layouts but all with outputs of around 80 hp and top speeds approaching 140 mph: the Gilera in-line four, the BMW flat-twin, the AJS V4 and the Guzzi transverse three-cylinder.

The Bianchi differed from the contemporary Gilera Rondine in the vertical disposition of its cylinders and its use of air cooling. It was also alone among its competitors in having its overhead camshafts driven by shaft-and-bevel gearing and triple pinions: all the rest except the Guzzi, which had chain-driven camshafts used pinions alone. Initial tests of the Bianchi by Alberto Ascari, later to achieve fame as a Grand Prix driver, were promising, but Italy's entry into the war brought its career to an end before it had begun.

A superb example of engineering, the Bianchi 500 was one of the masterpieces of the immediate prewar period.