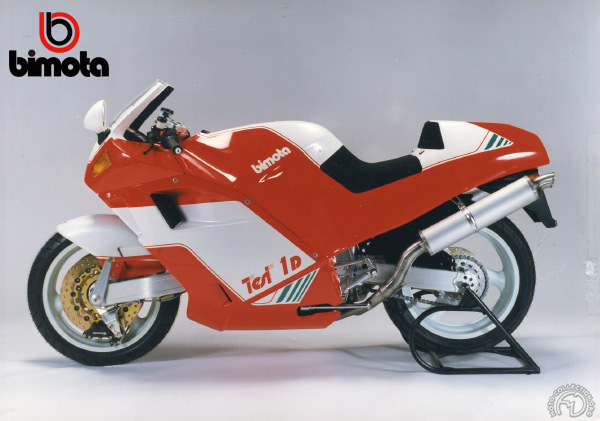 Pierluigi Marconi and Roberto Ugolini, two engineering students, were only 23 years old each when they submitted a project for a revolutionary motorcycle to the Bimota company. The bike was the subject of their final degree thesis - "Tesi" in Italian.

Powered by a 400cc Honda V4 and built under the technical direction of Federico Martini, their design was shown at Milan in 1983. It was distinguished by its hub-center steering, which was controlled by hydraulic rams, and its carbon-fiber frame. When the Tesi appeared the following year, it was powered by a 750cc Honda V4: Bimota entered it for races with Davide Tardozzi as rider.

The bike's development proved trickier than anticipated - some of its advanced features had to be abandoned. A third version, with a simple tubular frame, appeared at the end of 1985. An FZ 750 Yamaha engine replaced the original power unit in 1987, and a subsequent revision in 1988 dropped off the hydraulic steering in favor of bell-cranks. Marconi, who had become technical executive at Bimota, reopened the project in late 1991. The Tesi reappeared in a "street" version with a Ducati engine. Intended to be built in series, this version has not yet gone into production, though Bimota ultimately plans to make this latest Tesi its flagship model.

The Bimota Test 1D is planned to become the standard-bearer in the Italians lone struggle against the wave of Japanese bikes in Europe.Â”