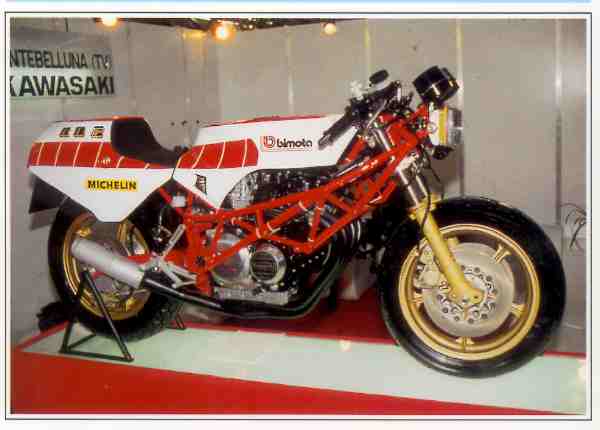 Rising to the challenge

As its name indicates, the KB2 was the second Bimota with a Kawasaki engine, but a number of features distinguished it from the marque's other products. It was the first medium-capacity production model from Bimota. It represented a calculated gamble since the Rimini company was already offering top-of-the-range exclusivity. It was risky to offer such a horrendously expensive machine with unremarkable performance.

The Start of a Trend

The other daring gamble of the KB2 was the use of 16 inch wheels shod with widely different tires; these were supplied by Michelin. Bimota had Â– and still has Â– extremely close links with the French tire maker and this machine followed the latter's then-current theories. The KB2 was the first modern machine to feature this concept, which was radical in terms of styling and handling, and which the other manufacturers in their turn ended up imitating.

The KB2 appeared the same year that Bimota took the 350cc World Constructors' championship. Its outstanding commercial success was due as much 1.0 its technical and esthetic originality as to the marques spotting record. Despite its inordinately high price, the 350cc KB2 cost three times as much as the 500cc GPZ Kawasaki Â– some 200 units of the revolutionary Bimota were built, opening new horizons for the increasingly ambitious company.

The KB2 was an historically important machine, for it was not only the first medium-capacity Bimota but also the marqueÂ’s first production bike with 16 inch wheels.