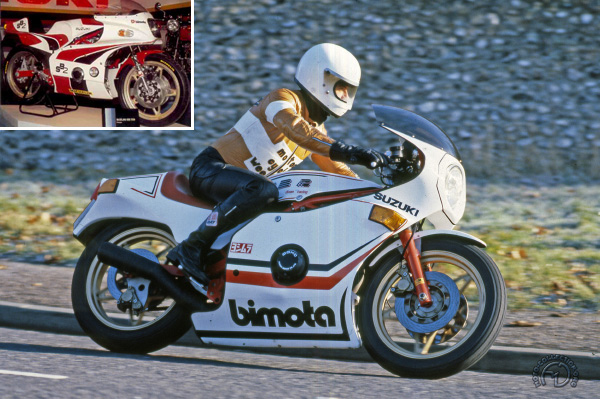 Founded in 1965, the Bimota company began as a central heating and air-conditioning company. But after 1972, the company reoriented to their real inclination Â– racing motorcycles Â– and began making special frames into which a variety of power units Â– Honda, Suzuki, Yamaha, Paton, Morbidelli and Aermacchi-HD Â– could be installed.

This new activity proved so successful that the growing fame of Bimota cycle components led the company to plan limited-run production. The first model from this new marque was the SB2: "S" for Suzuki who supplied the engine, "B" for Bimota and "2" because it was the second Suzuki-engined Bimota (the first had used a T500 engine). This machine boasted an exceptional level of finish allied to technical originality.

The frame was a lattice girder enclosing the engine laterally, an unusual layout for the period. This frame could be dismantled; the front and rear sections were attached by conical bushings, an elegant method of ensuring perfect alignment. The swing arm rear suspension acted on the single spring/damper unit through bellcranks, not previously a common practice. And finally, typical of the earliest Bimotas, the pivot of the swing arm was concentric with the gearbox output pinion shaft to eliminate any variation in chain tension. Original, with its fairing surrounding the handlebars and its cantoned lines, the SB2 was the commercial springboard for the marque.

Unveiled at the beginning of 1977, the prototype Bimota SB2 had a high-level exhaust system that exited beneath the saddle.