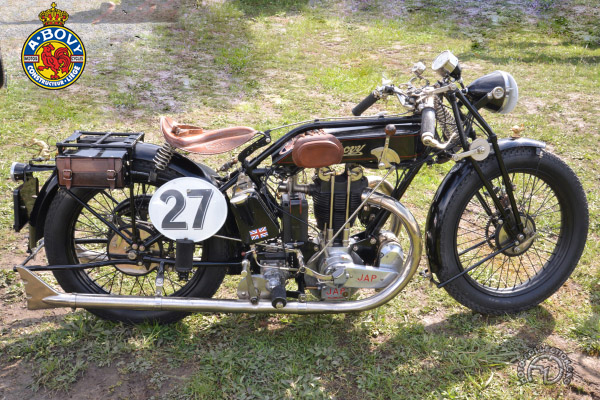 From arms to motorbikes

Like so many engineering workshops in the city of Liege, the firm of Bovy, founded in 1888, was an armaments manufacturer that also made bicycles.

From Pedals to Motors

This diversification was supported by the Alfred Bovy's participation in many cycle races. Bovy's first ventures into the production of motorcycles began in 1900 with a powered tandem and a shaft-driven tricycle. Little by little, the Bovy bikes were developed, and they were among the Liege-built machines used by WWI patrols of brave little Belgium.

The firm's first post-WWI motorcycle was powered by a little Wolverhampton-built Villiers two-stroke engine of 100cc, but the range was rapidly extended to include other two-and four-stroke models. Villiers also supplied larger two-strokes of 175 and 250cc, while JAP and Blackburne provided 350 and 500cc four-strokes with side or overhead-valves. Bovy also used Swiss MAG engines around 1929 and 1930. Transmission was by Sturmey-Archer or Burman two-and later three-speed gearboxes. Bovy's main means of publicity was through competition. Under the supervision of the manufacturer's son, the company invested heavily in racing, and its ace riders like Goor and Demeuter (who would be European Champions in 1934) won many victories on their Bovy machines. But the peak of the company's achievements came in 1931, when Mawet's Bovy finished third in the 350cc Belgian Grand Prix behind Jimmy Guthrie's Norton and Ernie Nott's Rudge.

The sports success achieved by Bovy's overhead-valve machines did a great deal for the sales of this model, which, despite its "Sport" designation, was a utilitarian touring bike.