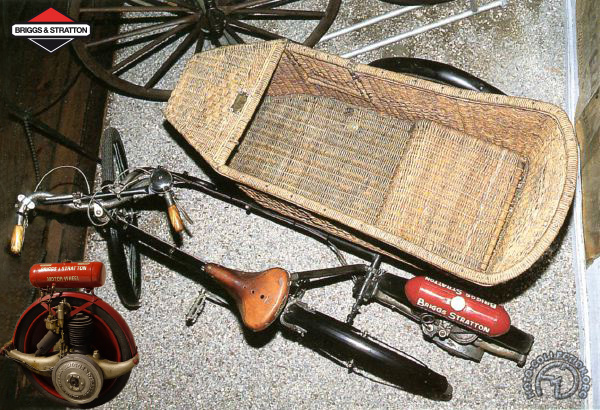 The Wisconsin city of Milwaukee has been world-famous as Harley-Davidson's home for over 90 years. But for nearly as long, it has housed Briggs & Stratton, originally auto accessory manufacturers, who ventured into the motorcycle world after WWI.

The story started in England where A.W. Wall, one of the great British pioneers Ā— his Roc motorcycle works in Surrey had been backed by Sir Arthur Conan Doyle, creator of Sherlock Holmes Ā— devised a bolt-on power attachment for pedal cycles around 1912.

The Wall Auto Wheel drove a small wheel by chain from the camshaft. The entire engine unit was mounted in a simple pivoting frame and attached to the rear of an ordinary bicycle frame so that the cycle could be banked on corners. In 1914, the Smith Company of Milwaukee acquired the rights to build the Wall Auto Wheel and improved the design in several respects, including changing the wire-spoked powered wheel with a disc wheel. The Smith Motor Wheel was very successful; by 1915 sales totaled 500,000. A Motor Wheel was even fitted at the rear of a rudimentary cyclecar, the Flyer Ā— one of the few five-wheeled cars ever manufactured. Its axles were directly bolted to six wooden planks that acted as floor, chassis and suspension. In 1919, the production rights for the Motor Wheel and the Flyer were bought by Briggs & Stratton. The engine was increased in power from 1 to 2 hp and fitted with a flywheel magneto. In 1921, Briggs & Stratton added a Motor Wheel-powered scooter.

In France, the Peuple company offered this strange combination, consisting of a Briggs & Stratton Motor Wheel-powered bicycle attached to a lightweight wickerwork sidecar.