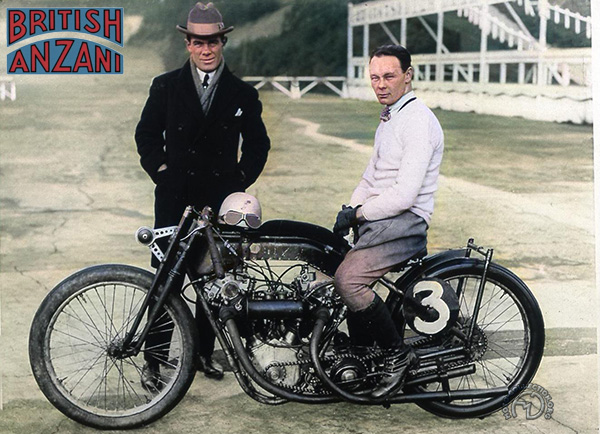 This bike, photographed in November 1923 on the Brooklands racetrack, was one of the most celebrated record-breakers of the 1920s. Its rider, Claude Temple, had just recorded a new two-way world speed record average of 108.48 mph for the flying kilometer.

First Across the Channel

Alessandro Anzani, a young Italian living in France, who had made his name in racing before building motorcycles Â— notably the Buchet and Alcyon-Buchet track racers Â—founded his engine factory in Paris in 1906. An Anzani three-cylinder, radial powered Bleriot's monoplane had made the first powered flight across the English Channel in 1909.

This success gained him many orders from England, and the British Anzani company was created after WWI. Belgian-born Hubert Hagens, responsible for motorcycle design in England, created an advanced 996cc V-twin with two single overhead-camshafts driven by shaft-and-bevel gearing. The gearbox was set behind the double-cradle of the frame. This machine used a Harley-Davidson front fork. Temple broke the record on his first attempt at Brooklands in 1923, then used the same bike to set an hour record of 102 mph at Montlhery in 1925 (the first time an average of over 100 mph had been achieved). Temple did even better in 1926, at Arpajon, with a new world record of 121.4 mph. He even fitted his bike with a sidecar to set the first 100 mph-plus "chair" record.

Claude Temple, seen here with Hubert Hagens (rear) shortly after setting the last world speed record achieved at Brooklands, died in 1993 at the advanced age of 98.