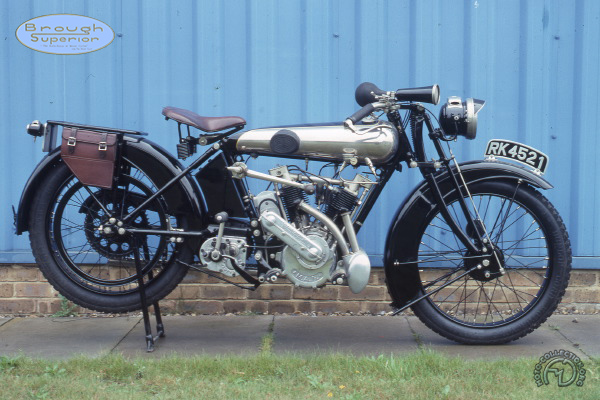 Founded in 1919, Brough Superior launched its second model in 1921. The firm was not committed to using JAP V-twins exclusively, though during its long collaboration with George Brough, the Tottenham company always provided him with "special" engines.

In order to make the Brough truly "superior" to other marques that assembled proprietary engines, transmissions and other components, George Brough always required his suppliers to make improvements (which he very often devised himself). For the 750 Mk II, he chose the Geneva-built MAG, a highly regarded power unit of the day. It was a longstroke V-twin with overhead intake and side exhaust valves, a legacy of the days when intake valves were automatically operated by the suction of the piston.

The "Brough Special" MAG was fitted with a single Amac carburetor and developed 13.6 hp at 3280 rpm. The Sturmey-Archer three-speed gearbox (another Brough exclusive) incorporated a transmission shock absorber. The finish of the Brough Superior was unsurpassed: Four coats of enamel were applied over a rubber-based anti-rust finish, all the light-alloy components were polished with buffalo hide and the cylinders were nickel-plated. The Brough was an esthetic masterpiece, with dual exhausts combining in a cast-aluminum muffler ahead of the crankcase Â– and tremendously advanced for 1920 Â– the streamlined plated saddle tank that would characterize Brough Superiors over the years.

In terms of finish and refinement, the Brough truly was superior; even the Lycett saddle was a special order. This Mk II 750 has dual foot rests, for touring or speed work.