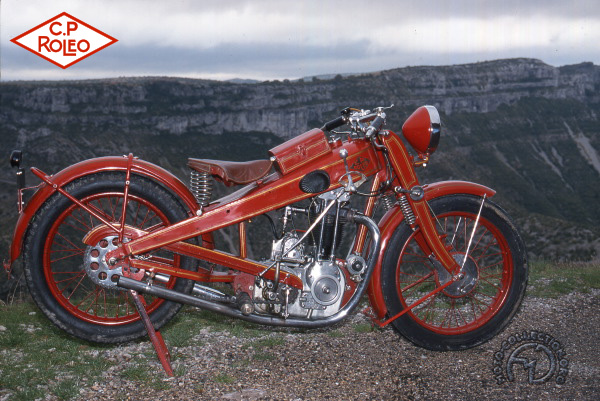 Keeping up with the trends

CP Roléo may not have been the best-known or best-selling French marque but it epitomized the popular trends of its clay Ā– the unit-construction of engine and gearbox and the pressed-steel frame. The firm, based in the Rue de Ia Folie Mericourt, Paris (and still in business today!), had been founded in 1897 by Leon Rollet, whose son diversified into motorcycle manufacture in 1927. He used various engines, all French, including overhead-valve LMP singles, Harissard two-stroke twins and the magnificent unit-construction Staub.

The CP Roléos were remarkable for their frame construction: "in pressed steel with integral triangulationĀ”, claimed the firm's publicity. It foreshadowed what the Japanese marques nowadays commonly call a "Deltabox" frame, a 0.1 inch sheet-steel box-girder incorporating the fuel tank and linking the steering head and the rear-wheel spindle.

The unit-constructed Staub engine fitted to this CP Roléo was very compact. The top end of its engine was built under license from the English JAP company, and copied the bore and stroke dimensions of the 350 JAP. The duplicated pressure lubrication circuits, enclosed valves, twin exhausts and a gearbox could be dismantled without removing the engine/gearbox unit from the frame. An unorthodox feature was the "back-to-front" gear quadrant, while the advance and retard was controlled by a left-hand twist-grip, similar to the control of American bikes.