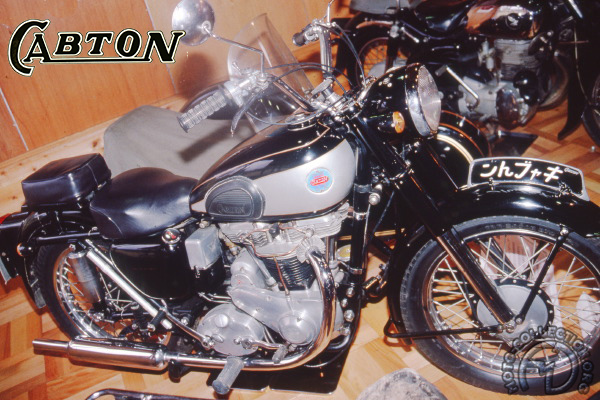 In 1956, the big-league Japanese companies were already beginning to create their own individual style. However, there still remained many firms in Japan that followed the old ways of blindly copying motorcycles made in other countries.

Since 1932, Cabton had been one of the leading names in the Japanese industry, but it had let itself fall into the trap of copying foreign designs. By the start of the 1950s, Cabton was no longer capable of creating an original concept. Cabton, which had previously made an extremely close replica of an Ariel 350cc single, launched this handsome 600cc twin in 1954. It was also known as "Mizuko Jidosha" ("the automobile from the land of rice"), and in its day, it was one of the three largest-capacity Japanese motorcycles.

A Copy of a Copy

Cabton took a roundabout route in copying the Indian Scout and Warrior, created in the United States in 1948 to counter the British motorcycles being imported into the US. These American bikes copied the typically British parallel-twin layout. On its twins (there was also a 500 in 1954) and its 250 single, Cabton copied Indian's curious valve gear with rockers hinged at the end rather than in the middle and operated by pushrods sharply inclined to front or rear. This resulted in a very deep cylinder head. Renamed "RV" and boosted to 29.5 hp, the 600 twin was the last Cabton before production ended in 1958.

Cabton 's odd transverse twin was copied from the 1948 Indian Scout and Warrior- which also, ironically, were the American company's last gasp.