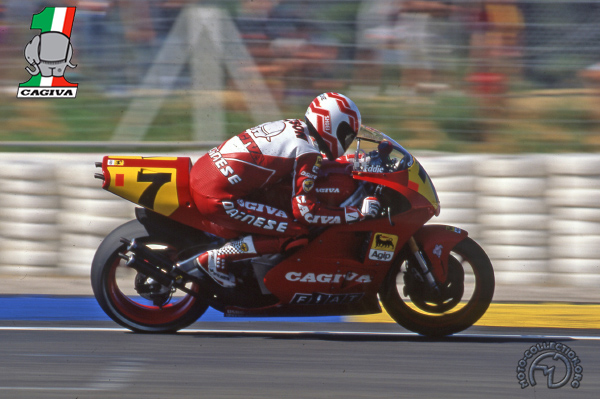 Since the many victories of Agostini on the MV during the 1970s, the Japanese have dominated the top category in Grand Prix racing. And, for over a decade, the Cagiva team has been the only major factory to attempt to defend the European colors in the 500cc class.

By signing four-times world champion Eddie Lawson for 1991, the Castiglione brothers pulled off a major coup. The riding and machine preparation skills of the American ace, allowed Cagiva to make its mark. The season started promisingly, with the Cagiva 500 winning in Italy, in front of those superbuffs, the "tifosi," and in France. But problems of road-holding and front-end adhesion prevented Cagiva from building on these encouraging exploits.

Technically, the Cagiva could learn nothing from the Japanese. The mechanical layout is the same as everyone else's: a two-stroke V4 with liquid cooling mounted in a box-girder aluminum frame; the brake disks are now in carbon fiber. Electronics are increasingly important, controlling the ignition, the valveson the exhaust system and even the jets in the carburetors (of Japanese origin!). By retaining the same riders for 1992, the Cagiva team can build on its experience and still offer the European industry the chance to distinguish itself at the very highest level.

With major victories in 1991, the 500 Cagiva has maintained the European presence in Grand Prix -racing at the very highest level.