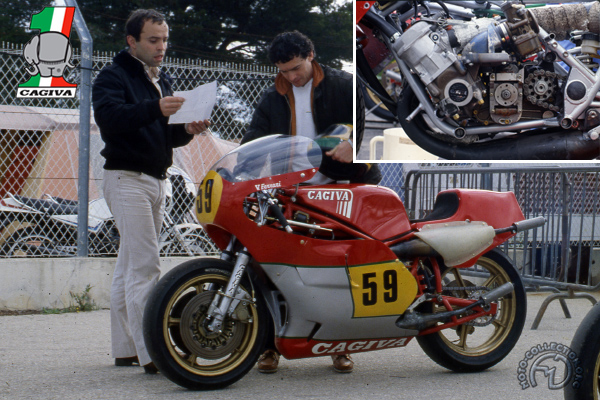 The Castiglioni brothers were racing enthusiasts who backed a 500 Suzuki ridden by Lucchinelli in the World Championship in 1978. The same year, the ink was scarcely dry on their purchase of Aermacchi from Harley-Davidson before they were planning to revive its sporting image. In 1980, while they were overhauling Aermacchi's industrial side, they signed rider Virginio Ferrari (Yamaha) in order to ready the team for a real comeback.

They entrusted the design and development of a 500 racer to former members of the Aermacchi and MV racing organizations. The engine was inspired by the then-dominant Yamaha. However, an unorthodox feature was the mounting of the quadruple-four rotary intake valves above the gearbox, where they were driven by a cogged belt. Several different frames were tried. One of these, designed by the Dutch engineer Nico Bakker, featured an adjustable-rake steering head.

The season started slowly, for the engine and frame were sadly lacking in preparation, and Ferrari only managed to finish a single Grand Prix, the German GP. The unfornunate Ferrari was coming in seventh in the Yugoslavian GP when Mike Baldwin collided with him and knocked him out of the race. In 1982, Cagiva completely redesigned its 500, which, as was then fashionable, had a square-four engine. As of 1992, Cagiva remained the sole challenge to the Japanese in this category.

Cagiva 's first real track racer had only a short, inglorious career. It was painted red and gray in tribute to the legendary MV Agustas.