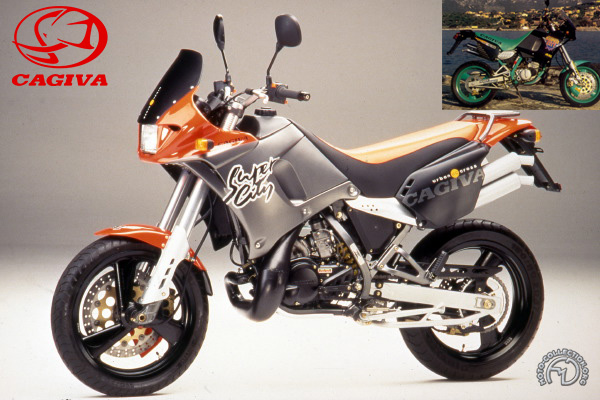 Trail bikes were originally developed out of the old-time scramblers, dual-purpose machines developed both on- and off-road. This concept was abandoned with the coming of the 125cc trail bikes, replicas of motocross machines. Then they underwent a further change in 1990 when the dominant theme was inspired by "supermotard" bikes (a specialized offshoot of motocross involving speed events run on a mixed dirt/blacktop track).

It's a new market and a new breed of trail bike, of which the Cagiva 125 Super City is among the most flamboyant examples. Supermotard defines road machines of a confusing type. The frame, suspension, single-cylinder two-stroke engine, saddle flowing across the tank top, wide handlebars and high-level tailpipe are all typical motocross features, while the small front wheel fitted with a monstrous (12.6 inch) disc brake, spoked wheels and wide-section tires hint of Grand Prix racing.

Aimed at the Youth Market

The final feature (which is un~uitable for real off-road use) is a spectacular design intended to blow the minds of its youthful target audience. With its 30 hp liquid-cooled engine, ultrapowerful braking, superior handling and devastating styling, the Cagiva Super City has nothing of the old utilitarian trail bike in its make-up. Like the Yamaha Light Burner and Gilera Free Style, it's all about adventure in the concrete jungle.

The Cagiva 125 Super City is an ideal mount for college kids anxious to impress their friends.