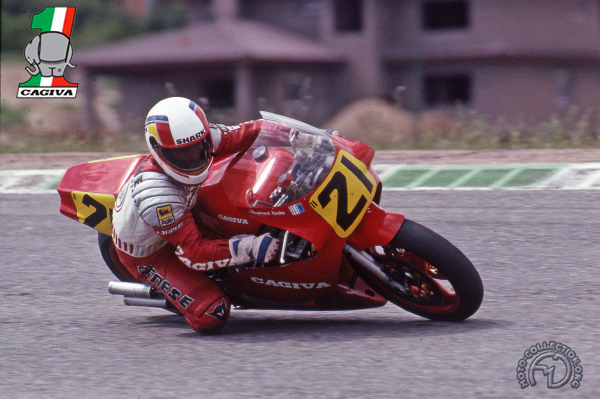 The 500cc Cagiva Grand Prix racer made a great impression at the end of the 1987 season with the fine series of races ridden by Raymond Roche. In 1987, the Castiglione brothers persuaded top American rider Randy Mamola to assist in the development of their machine. They benefited from the speed skills of the popular Californian. While they awaited MamolaÂ’s arrival, Cagiva worked on the evolution version of the C587.

Evolution Version of the C587

The C588's frame was improved in detail and given an asymmetric swing ann. The Cagiva was heavier than the Honda and Yamaha, but lighter than the Suzuki. The modifications to the engine Â– still a 56-degree V-four with twin crankshafts and quadruple 35mm Mikuni carburetors Â– were chiefly made to the cylinders and crankcase to try to solve the problem of mid-race power loss.

The engineers sought to improve the smoothness of the engine, which was brutal but renowned for its power output. Every effort was made to trace the faults (like the control of the guillotine exhaust valves), which had spoiled the reputation for reliability established the previous season. The Cagivas had a difficult start in the 1988 Championship season, due to the caution shown by Pirelli over its new Grand Prix racing tires. However, during the second half of the season. Randy Mamola had some excellent results. For the first time since the withdrawal of MV Agusta from racing, an Italian bike was in contention for 500cc honors.

Raymond Roche- shown here during practice for the Grand Prix Â– had his season curtailed by a bad fall in the Italian Grand Prix.