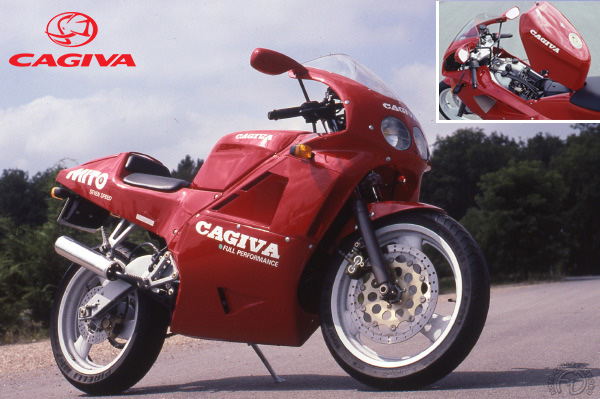 A racer for the road

It's doubtful whether any road-going motorcycle has ever come as close to being a racing machine as the Cagiva Mito (Italian for "Myth") which - at a price! - has all the refinements of a competition bike. License plates look out of place on this pavement burner! Without question, this machine gets its kicks off Route 66, in places where true competition bikes are at their best - on the race tracks.

At Home on the Track

The Mito can mix it up in traffic, but it's on the track that it reveals its true nature, where its efficiency, lightness, and precise handling come into play. You could easily be mistaken for a champion rider on the seat of this scaled-down replica of the 500cc racer that Eddie Lawson rides in Grand Prix Â– and you'd need to be a real ace to explore the outer limits of the Mito's handling.

Developing a remarkable 288 hp per litre, the Cagiva engine is as highly developed as the rest of the bike. Such a phenomenal power output implies - and it's the least you could expect - a thoroughbred machine that demands more than the usual amount of concentration from its rider to give its best. Moreover, the Cagiva has -for a road-going bike - the unique feature of an elaborate seven-speed transmission.

A pretty powerful performer, the Cagiva Mito is impeccably finished, down to the last detail.