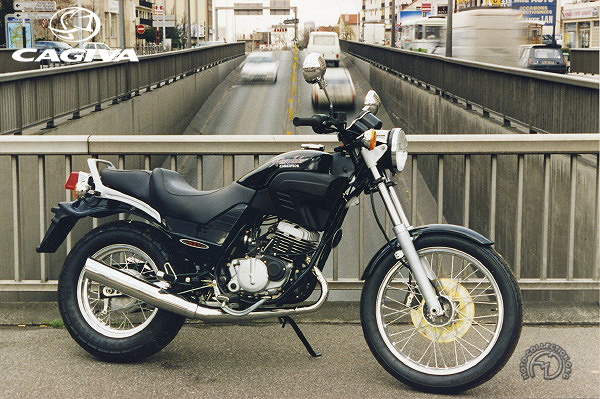 In the chaos that followed the collapse of communism in the former Czechoslovakia, Cagiva moved quickly to acquire the renowned CZ company in 1992. The plot was twofold: to use the CZ facilities to build entry-level motorcycles at low cost and to revive the project of building a 175cc CZ overhead-cam four-stroke, which had been stagnating for several years. Only the first phase has yet been achieved, but the second should not be far behind.

No question that the Roadster is a Cagiva: The model already existed in a different form under the name "Blues" and only final assembly is undertaken by the CZ factory in Strakonice.

All the major elements were imported from Italy or other parts of Western Europe Â– the carburetor was a Dell'Orto, not a Jikov, the tires were Metzelers, not Barums. As for technology, it was at the leading edge in its class: automatic intake valves, bellcrank rear suspension, disc front brake Â– nothing was lacking. The project was interesting from a financial point of view, as long as salary levels and costs in the Czech Republic didn't catch up with those in Western countries. It enabled the Roadster to be sold at half the price of an Aprilia Red Rose! However, the machine was comparable with the other utility 125s on the market such as the Honda CG, Yamaha SR, XT and DTMX or the Suzuki GN. Only a MuZ does better, but it is otherwise less attractive.

The Roadster is a 125 custom machine perfectly in tune with the times, with modern technology and elegant lines. It's attractively priced because it's built in the Czech Republic.