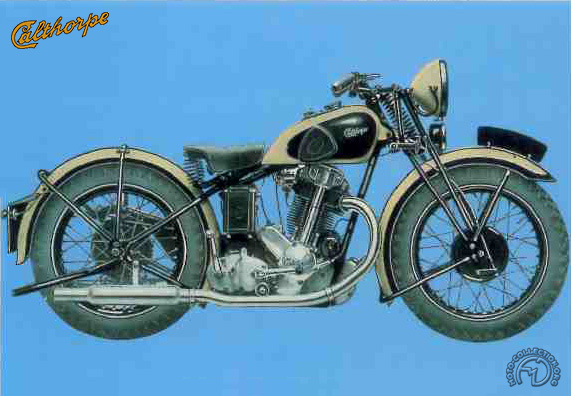 Quality was not enough

This little Birmingham-based manufacturer originally built "Bard" bicycles (and later motor quadricycles), then launched the "Calthorpe" marque in 1911. Calthorpe used different engine makes until1925, when it launched in-house power units of 350 and 500cc. Then in 1929, it added a range of 250cc inclined singles with twin exhaust pipes.

The Calthorpes quickly earned a sound reputation for quality, and the little factory offered its products at competitive prices compared with the great names of the British industry. In 1936, prices ranged from $56 for the 250 to $90 for the 500 competition model with high-level exhausts. The 350 and 500 cost roughly the same price according to the level of options: BTH magneto, tachometer, chromed tank, high-level exhausts and so on. In comparison, the same year's BSA supersports Empire Star cost around $100.

In direct contrast to other makers, Calthorpe did not spend money on competition or endeavor, no matter how little it cost, to boost sales by trying to win the Tourist Trophy. The company was content to rely on attractive color schemes and a reputation for quality. At a time when most British machines ranged from funereal black to dark red, Calthorpe offered all its models with tank and mudguards strikingly enameled in ivory, with multiple chrome accents. But it was all in vain; this rational policy failed to make the fortune of the marque, and the public shunned its bikes, not because they had any major faults, but because they lacked the distinction of a technically advanced racing image. Calthorpe closed down in 1938.

Modern color illustrations of 1930s motorcycles are rare, but Calthorpe proudly displayed the elegant Ivory in all its glory in their catalogue.