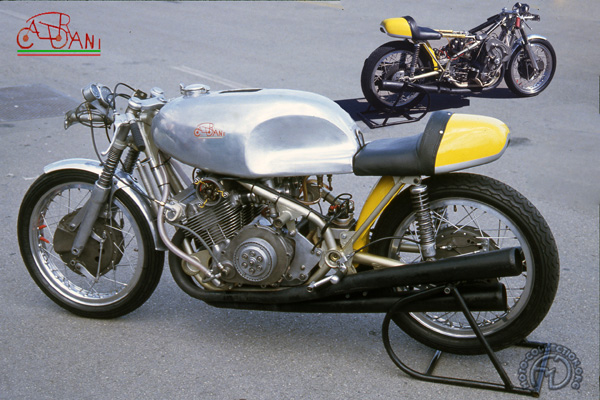 In 1968, the MV Agusta of Agostini ruled the roost in 500cc GP racing. For two seasons, the marque raced a three-cylinder machine which was lighter and more compact than the old four-cylinder model. After Honda withdrew from racing in 1967, the field largely consisted of old British singles, and MV's dominant role prompted two skilled technicians, Carlo Savare and Daniele Fontana, to mount a challenge. They called their machine the Cardani.

Borrowed from the Best Sources

The Cardani looked remarkably similar to the MV Agusta, with cylinders inclined forward at 30 degrees from the vertical and its twin overhead camshafts driven by a train of pinions from the end of the crankshaft. Even the appearance of the frame was similar; only the Cardani's yellow finish and a few curves told the two machines apart. Above all, the engine layout had been adapted to the requirements of Jack Findlay, who had been signed as rider.

Findlay had always favored a heavy weight bias towards the front, and had made special frames to house his engines. The Cardani's engine was set well forward compared with most machines of its day. But the funds to develop the machine were lacking and it never raced. Sensibly, Fontana and Findlay eventually decided to use a Suzuki engine in their own frame with a similar geometry which presaged the design trends of the Eighties. They called the result "Jada."

The Cardani closely resembled the MV Agusta which it hoped Â– unsuccessfully Â– to rival on the track.