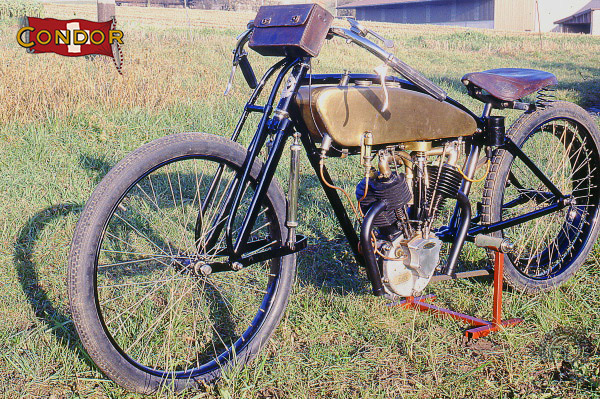 Condor of Courfaivre (Jura) built its first motorcycle in 1901 , and after making a number of singles, the marque launched a series of powerful V-twins with ZL engines.

ZL engines (also known as Zedel) were made at Saint-Aubin and took their name from the initials of the two founders of the firm, Ernest Z├╝rcher and Hermann Luthi. The company's main sales were made in France, so in 1905, the partners established a French subsidiary just over the border in Pontarlier to avoid customs duties. In 1907, Z├╝rcher, who had been running the Pontarlier factory, returned to Saint-Aubin, where he built a new factory for the production of cars and motorcycles.

This racer ┬ľ allegedly the personal bike of Ernest Z├╝rcher ┬ľ was specially built in 1905 to capture Swiss national records. With it, in 1906, Kaspar made a record of 10 kilometers in 7 minutes, 7 seconds (52.4 mph) on the banked cycle track at La Hardau in Zurich. Its Swiss-made ZL power unit was related to the Pontarlier-built F-head racing V-twin engine, fitted between 1906 and 1911 to the French Griffon racers. But, unlike the French unit with conventional cams, the Swiss Zedel "Z├╝rcher Special" engines had two superimposed face cams, one operating the side exhaust valves and the other actuating the overhead intake valve through pushrods and rockers. A flexible drive taken from the same shaft drove the commutator for the twin-coil trembler ignition, mounted beneath the flat -tank.

The mechanical intake valves of the Condor racer's ZL engine are very much an additional feature; the intake pipes are otherwise identical to those fitted with automatic valves.