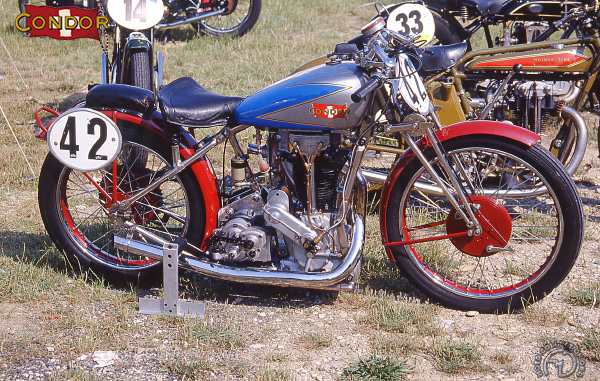 Condor was based at Courfaivre, near Neuchatel. Motosacoche, whose works were a little further south, in Geneva, sold its engines under the marque name MAG.

Both being French-speaking Swiss companies, the two struck up a close relationship. In the early 1920s, Condor bought its engines from Motosacoche. It was something of a favored client, particularly with this model, whose MAG D 50 power unit was only available to a few customers, such as New-Map, Standard and Triumph (and to Motosacoche itself, who used it in their Type 422).

The D 50, from the Jubilee series launched in 1930, was a client-competition engine. It was sketched out by the British engineer-tuner Dougal Marchant, and realized by in-house Motosacoche engineer Nebel. Its dominant characteristic was its excessive height, which made it difficult to install in a frame. The height was due to the cast-aluminum oil reservoir mounted beneath the crankcase and the interposing of short pushrods between the rockers and valve stems. Marchant used this technique on most of his engines. The gearbox was Burman built Â– under license by Condor Â– because the oil container under the engine had to be tilted forward by 90 degrees. And though it was one of the few "privateer" engines in its class, the D 50 was dropped in 1934. For his part, Cordey, the Condor works rider, used an A 50, which was more powerful and less prone to overheat.

Condor obtained its best sport results in hill-climbing, a discipline which made the most effective use of the D 50's torque and acceleration.