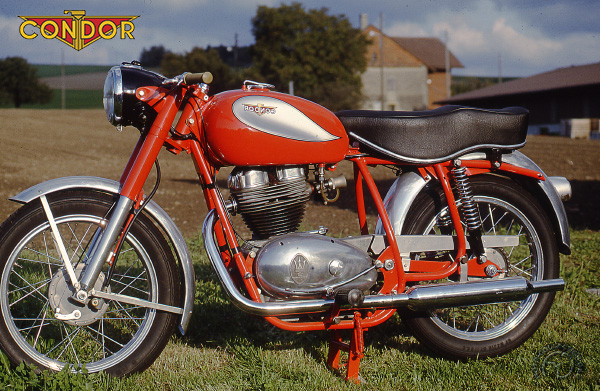 Switzerland may be only a little country but over the years it has produced some 74 different makes of bike Â– and some of them Â– have achieved world fame. Condor, whose name ranks second in the hall of fame of Swiss motorcycling after Motosacoche, was founded at Courfaivre in 1901 and until recently was still supplying bikes to the Swiss Army.

The marque made its own engines, including a whole generation of flat-twins, but also used Swiss MAG and Italian Ducati power units. In 1953, Condor began work on a medium-capacity bike intended mainly for the military and decided to use a new Italian engine, which had just been launched by a company of great renown in the automobile world Â– Maserati.

The motorcycling activities of Maserati were short-lived (they ran from 1953 to 1961) and their production was small. After making their debut with a modest 125cc two-stroke, the famed marque from Modena marketed two ohv four-stroke singles, a 160cc and a 250 with the same engine as the Condor. Then came a 250cc twin and a 175 single with an overhead camshaft. Maserati's minuscule output must have seriously worried the Swiss marque, which had its reputation and the aftermarket to consider. Though the Maserati-engined 250 was built in both civil and military versions, less than ten had been completed before it was replaced by the Condor Type A 250 with an "own-make" overhead camshaft engine and shaft drive. Production of the A 250 exceeded 3000 units.

Though it never passed the pre-production stage, this Maserati-engined Condor (seen here in civilian guise) is today a highly-prized collectors' item.