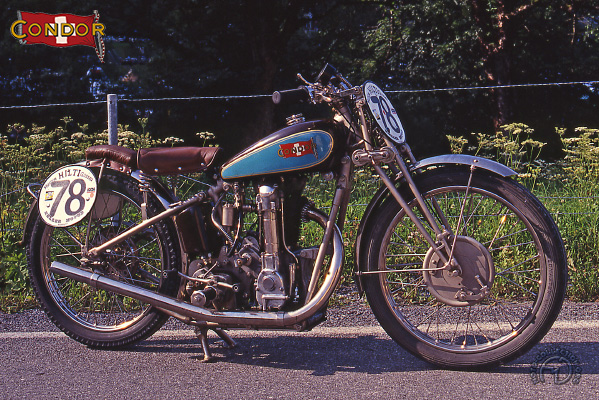 The golden age of racing in Switzerland began in the late 1920s, when celebrated British rider-designer Dougal Marchant was signed by Motosacoche to develop an overhead-cam race engine. He arrived in Geneva in 1927 with a ready-prepared engine, the Type M (for Marchant); the magneto was mounted ahead of the cylinder. But in mid-1928, he built a new power unit with the magneto behind the cylinder and driven by pinion gearing.

With this model, British rider Wal Handley won the Swiss Grand Prix at Geneva in 1928 in both 350 and 500cc classes, thus becoming Double Champion of Europe. That was the greatest success achieved by Motosacoche, and the many European marques that used MAG ("Motosacoche Geneve") power units clamoured for engines prepared by Marchant.

Condor Â– the nearest firm to Motosacoche and one of the oldest Swiss marques, based at Courfaivre in the Jura region Â– had the pick of the litter. Even before WWl, Condor had been fitting MAG engines in own-make cycle parts, and during the inter-war period, they used nothing but these power units, even for racing. For obvious reasons, the two marques came to an agreement to race in different categories. Condor entered its motorcycles in the 250 and occasionally 350cc classes, while Motosacoche ran in the 500cc and above category. In 1929, Motosacoche supplied not only Condor but also the German Standard and Triumph companies with former works overhead-cam engines.

Although Condor was officially restricted to the 250 and 350cc classes with this engine, it appears to have also raced in the 500cc category after 1929.