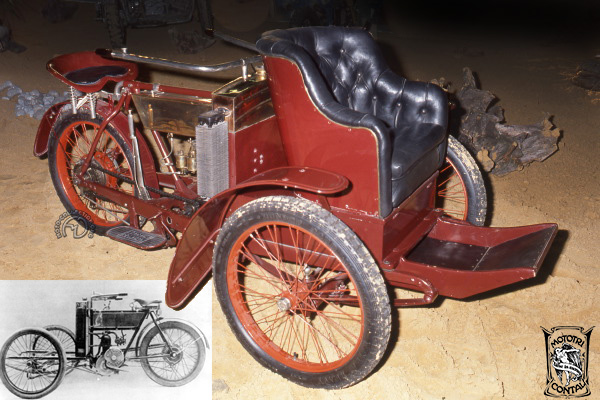 They called the contestants in the 1907 Peking-Paris auto race "the mad motorists" Â– and none was crazier than Auguste Pons. He proposed to cover the 10,000-mile route, which included the Gobi Desert and the trackless wastes of Siberia, on a tiny motor tricycle.

Pons and the Contal became famous with a spirited performance in the 1906 "Coupe du Matin" race. This would prove to be a far more severe test of the little three-wheeler.

Lost in the Desert

The theory was that a light vehicle would stand a better chance in roadless country, as it would be less likely to sink in mud than a car. In case there were ditches to cross, special removable wings were fitted to bridge the gap (although the third wheel hung down between them). There were just two speeds, provided by epicyclic gearing in the rear hub. Since the little Tri-Contal didn't have enough pace to carry enough fuel and other supplies, it had to rely on the goodwill of other competitors to transport anything that didn't fit Â– a "gentleman's agreement" was drawn up for mutual aid between Pons and two other contestants. But the roads outside Peking were so bad that the Tri-Contal had to be towed and put on a train to Nankow, some 40 miles along the route. Seven days later, the Tri-Contal lost touch with the other cars in the Gobi Desert and ran out of gas. The crew's money was with their supplies, on another car. They walked in search of help and were rescued after 36 hours by Mongol horsemen. Pons and his companion Foucault abandoned their tri-car in the desert and made their way back to Peking.

The robust construction of the Moto Tri-Contal proved unable to withstand the journey across the Gobi desert in the 1907 Peking-Paris Race.