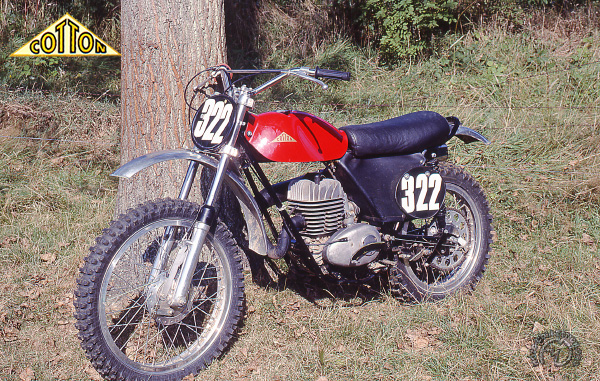 Return of a legend

From the start of the Twenties, the Cotton built up a solid reputation, mainly due to its triangulated tubular frame, inspired by that of the Scott, which gave it an enormous advantage in terms of roadholding. The marque found it difficult to re-establish itself after the Second World War, and it was only in 1953 that two Gloucester enthusiasts stepped in to reform the company and production restarted at the firm's Vulcan Works.

These new-generation Cottons used the popular 250cc Villiers Starmaker two-stroke, and immediately successfully returned to road racing with well-known riders like Bill Ivy and Derek Minter. They built a motocross bike using the same double cradle frame made up of small-diameter tubes, and had just enough time to build up an excellent reputation Villiers stopped making engines.

Cotton adopted Italian Minarelli engines and continued making their bikes in motocross and enduro versions. A Minarelli-engined Cotton Cavalier won the 200cc class in the 1969 Scottish Six Days' Trial. Cotton moved into a new factory in 1976 and returned to road racing with the Rotax-engined twostroke LCRS 250, which was their last model.

This superb Cotton is one of two exact replicas of the 1963 models built to special order by A]S Motorcycles in 1991.