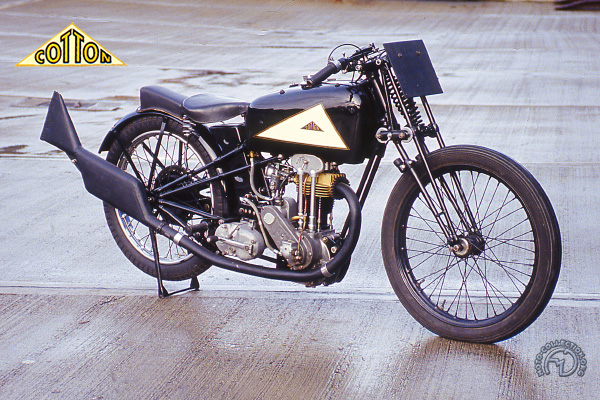 In 1914, Frank Willoughby Cotton of Gloucester patented a frame made up of four straight tubes directly connecting the steering head with the rear wheel spindle, equipped with wide-set chain stays, torque tubes, and splayed down tubes to support the engine and gearbox. Cotton began building bikes to this pattern in 1918, using a costly but precise cast-steel frame jig. Amazingly, that jig was still in use 60 years later! The company really hit the headlines in 1923, when an unknown 19-year-old named Stanley Woods won the first of his ten TT victories at record speed on a 350 Cotton in only his second try.

Cotton enjoyed considerable success with machines powered by Blackburne, Rudge or JAP engines, and while production was still limited, demand was sufficient to enable the company to move into a new factory.

In 1929, racing was dominated by the major manufacturers, who had the means at their disposal to build their own engines, and JAP engines were unable to match the engines from Norton and Excelsior. But Cotton remained an enthusiastic user of the Tottenham-built engines. There were ten Cotton-JAP models listed in their 1934 catalogue out of 20 singles from 150 to 600cc. In 1935, rider-tuner Eric Fernihough, "FerniÂ”, who was obsessed with record-breaking, set 12 world long-distance records at Brooklands with this Cotton-JAP, notably 500 km at 78.8 mph, 1000 km at 77.8 mph and 12 hours at 73.1 mph. Ridden by Charles Mortimer, the same bike placed second in the Dieppe and Brooklands GPs.

The 1935 Cotton Brooklands Recordbreaker features the triangulated frame patented in 1914 by Bill Cotton.