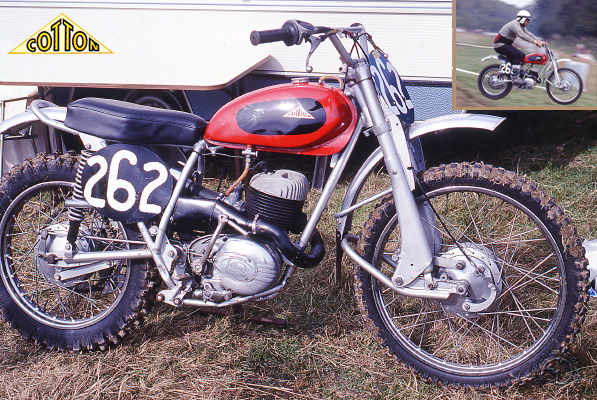 Arrival of the featherweight

Just after WWII, scrambling was the most popular form of motorcycle sport in Great Britain. The machines were initially big 500s derived from road-going models, such as the FN of Belgium's Rene Baeten or the Manx Norton ridden by Les Archer. .

To cut the speed of scramblers, the circuits were progressively made more difficult. This forced the marques to create more manageable machines and is why lightweight bikes powered by two-stroke engines appeared.

From TT to Telstar

Fitted, for the most part, with the robust 250cc Villiers 32A two-stroke, the pioneers were the products of small British manufacturers such as Greeves, Dot and Cotton. Suitably tuned, this engine - originally designed as a touring unit - fitted in a featherweight frame, rapidly enabled these light machines to get the better of the big, heavy 500cc four-strokes. The little factory, founded in Gloucester in 1920 by

Willoughby Cotton, never produced more than 20 motorcycles a month. Yet, it created an enviable reputation thanks to its patented lightweight frame made from straight tubes. In 1923, Irish rider Stanley Woods won the Junior TT with a works Cotton equipped with a 350cc Blackbume engine. Closed during WWII, the factory reopened under new management in the 1950s. It concentrated on trials and scrambler contests before returning to road-racing with a speed machine powered by a Villiers Starmaker engine called the Telstar - with which Bill Ivy, Peter lnchley and Derek Minter achieved success.

This Cotton 250 is identical to the machine ridden by Bryan Goss, top gun of the Cotton works scrambler team.