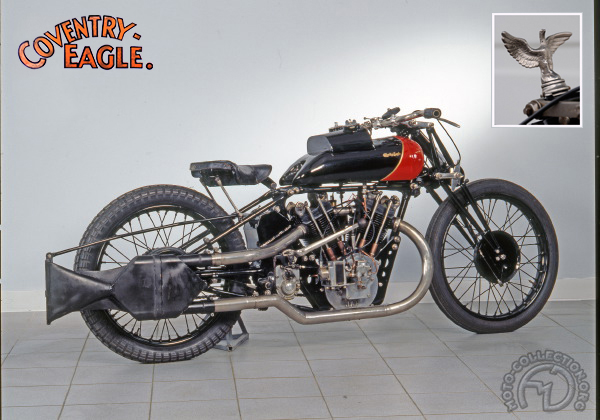 Record-breaking in the rain

November in Britain is not the ideal time for record-breaking, but the Olympia Motor Cycle Show and showtime records were always good publicity. So, in 1929, lashed by driving rain on the bleak concrete banking of the Brooklands track, the one-legged rider Harold Taylor and his passenger J.M. Waterman set a new 200-mile sidecar record of 81 mph with this JAP-engined Coventry-Eagle Flying8. It had already set 4-hour and 9-hour sidecar records of 65 and 66.5 mph in 1925. The massive silencer was mandatory since Brooklands was set in a residential area in Surrey's exclusive "stockbroker beltĀ”.

Coventry-Eagle was one of the 23 different British marques powered by JAP engines, which held 171 speed records at the beginning of 1930, including the world speed record of 130 mph set by a 1000cc JAP-engined Brough Superior in 1929.

A Rival for Brough

With its saddle tank, the Coventry-Eagle Flying8 resembled the Brough Superior. Hardly surprising, George Brough and Percy Mayo had sketched out plans for their ideal motorcycle. The first Flying8 had a 976cc side-valve JAP engine and was good for 81 mph. It was replaced by an ohv version in 1926. Unlike Brough Superior, which only built exclusive luxury machines, Coventry-Eagle offered a wide range in all classes. But in 1939 Coventry-Eagle ceased manufacture.

This stunning Coventry-Eagle Flying8 is photographed on the banking of the Brooklands track where it set the new 200-mile sidecar record in 1929.