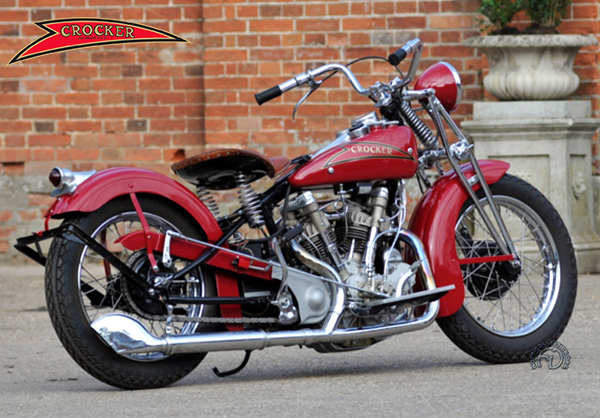 Albert G. Crocker was a remarkably talented engineer who started his career at the Aurora Automatic Machine Company, makers of Thor motorcycles. He joined Indian in 1909, and in 1928 became the marque's distributor in Los Angeles. At the same time, he made parts for the Indian factory at Springfield, Massachusetts, under subcontract, and also built a handful of short-track speedway racers to compete in the popular Class A events.

In 1935, Al Crocker, age 53, decided to build a high-performance motorbike under his own name. Taking his inspiration from the layout of the Indian, Crocker and his assistant Paul A. Bigsby created a big-twin of highly original concept, a sort of two-wheeled Duesenberg.

Any Color the Customer Wanted

Each Crocker was a unique piece built to the customer's choice, in that the purchaser dictated the displacement - anything the client desired between 1000 and 1500cc Â– the color scheme and the level of equipment. The Crocker had overhead-valves (uncommon on American touring bikes at the time), and in its 1500cc form, the bore and stroke were equal, another rarity in that era of long strokes. The Crocker had a transmission built to take 200 hp in a steel casing that contributed to the rigidity of the frame. There was liberal use of aluminium castings for components, including the fuel and oil tanks. The Crocker may have been difficult to start, but it had no problem exceeding 105 mph! Only 197 Crackers were built, and even at the high price demanded, it was said that Al Crocker lost an average of $2500 on every machine he sold between 1936 and 1941!

The Crocker was regarded as such a threat by Harley-Davidson that the company unwisely sued Al Crocker for patent infringement Â– and lost!