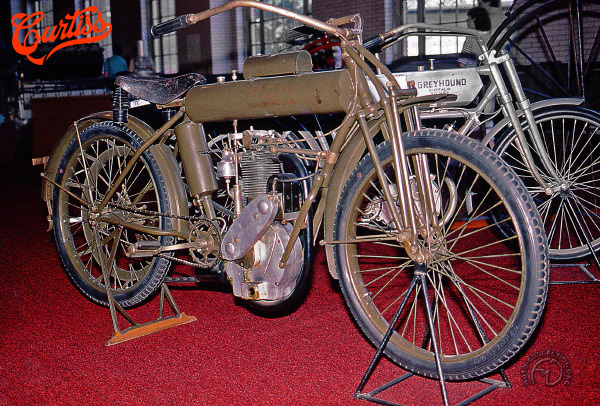 Like other aviation pioneers, Glenn H. Curtiss was also interested in motorized transport. His motorbikes, built in his factory at Hammondsport (New York), were regarded as the biggest threat to Indian on the technical front between 1902 and 1907. Indeed, in 1904, Curtiss was the first to use twist grip controls, a year ahead of Indian, who claimed to have invented the idea.

Curtiss was a keen motorcycle racer, and even built a fearsome V-eight motorcycle driven by one of his 40 hp aviation-type engines, similar to those originally used for powering the pioneer Baldwin dirigibles.

"The Fastest Man in the World"

In 1904, he traveled south to race in Florida. It was a state to which Curtiss would often return, finally establishing a factory for his lightweight "Aerocar" trailers after WWI. During the Florida Speed Carnival, on January 28, 1907, Curtiss was unofficially timed on his V-eight motorcycle at a record 136.3 mph, a speed that would not be beaten until the early 1930s, and was labeled "the fastest man in the worldÂ”. It was a far cry from his first experimental two-wheeler, built in 1901 using engine castings bought from the E.R. Thomas Company in Buffalo, New York. His production machines were initially sold under the name "Hercules" and subsequently "Curtiss." He also sold his engines to other makers, such as Marvel. Curtiss motorcycles remained in production until 1912; both singles and V-twins were manufactured. By that time, Curtiss was well-established as an airplane manufacturer.

This Curtiss 500 single was built as a racer for a private customer; it bad neither brakes nor suspension, but the overhead-valves and roller bearings were advanced for the period.