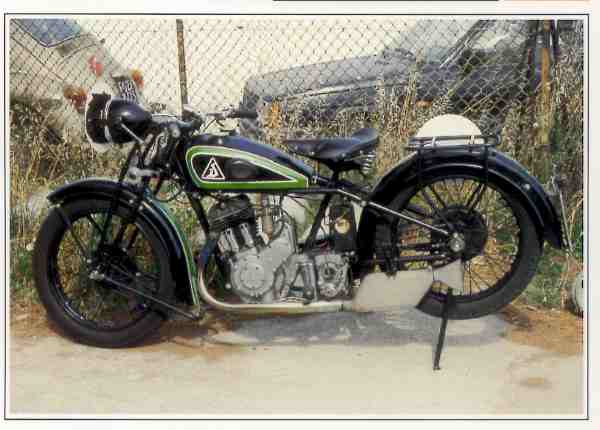 The Deutsche Industriewerke, based in the Spandau quarter of Berlin, began life in the armaments industry. But after Germany's WWI defeat and the ban on weapons manufacturing, it had to find new outlets for the employees' skills. The company took over the short-lived Star marque, whose designer H.F. Ginther had created a 393cc F-head flat-twin.

Deutsche Industriewerke used this model as the basis of its own make, the D-Rad, redesigned by their engineer, Christiansen, and launched in 1922. Christiansen lost no time in creating his own unit-construction side-valve 500 single, which replaced the flat-twin in 1927.

His R/4 acquired an excellent reputation for reliability, if not performance: Its leaf sprung front fork impaired its roadholding qualities. It was improved in 1926 by Martin Stolle (exBMW and Victoria), who had just succeeded Christiansen. D-Rads began to appear in endurance trials Â– notably in a long-distance runs from Berlin to Cairo. Stolle developed the R/6 in 1927 and the R/9 in 1928. He made his own overhead-valve R/10 in 1929. Dry-sump lubrication and a roller-bearing crank were new and rare refinements. The side-valve R/11 derivative appeared in 1930. It cost less than the R/10, which won many sport events, but was still too costly. The Great Depression proved too big an adversary for D-Rad, which threw in the towel in 1932 and was absorbed by NSU. Right until the end, the firm relied on less-ambitious models with Bark 200 and 250 two-stroke engines.

Between the 1929 R/9 and the Rill of 1930, there were many subtle changes, such as the replacement of the fuel tank and leaf sprung front fork by more modern designs.