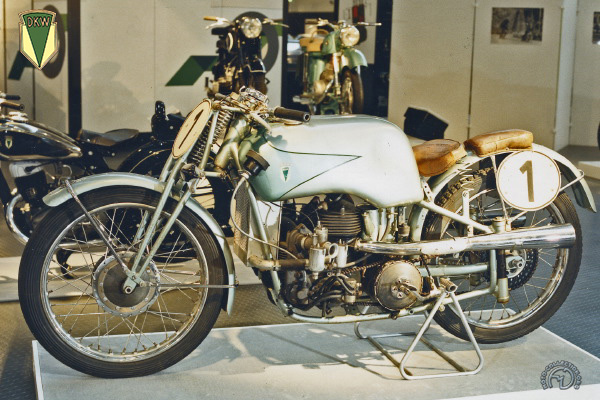 The twin with six pistons!

DKW became the leading two-stroke expert during the 1930s, and the 500 ULD was the finest example of this. This machine combined all the advanced techniques then current in the two-stroke domain. While its competition record was modest, the same techniques demonstrated their efficiency on the very similar DKW 250 which won the Junior Isle of Man Tourist Trophy in 1938 and became champion of Europe in 1938-39.

The model designation said it all: "U" for the "U"-shaped layout of the double piston; "L" for "Lader" ("compressor"); "D" for "Drehschieber" ("rotary valve"). The 500 ULD had two double pistons, fed by two pumping-piston blowers mounted vertically behind the engine and drawing their mixture through a superior transverse rotary valve. Despite the use of magnesium for the brakes as well as the rims, the ULD was overweight, not as powerful as it should have been and handicapped by its fuel consumption.

But its relative lack of competition success was due to the fact that it had the ill-luck to compete against the formidable BMW RS 500K, which proved unbeatable, and its career ended in 1951 in German national racing. Only one example of the 500 ULD survives, though it was not the first to bear this designation. The original 500 ULD was an experimental machine of 1935 which had horizontal cylinders and a pressed steel frame which lowered the center of gravity, allowing the use of a 10.6 gallon (US) fuel tank.

The 500 ULD was the last of a line of highly-developed two-stroke racers that established DKW as the technological leader in this field.