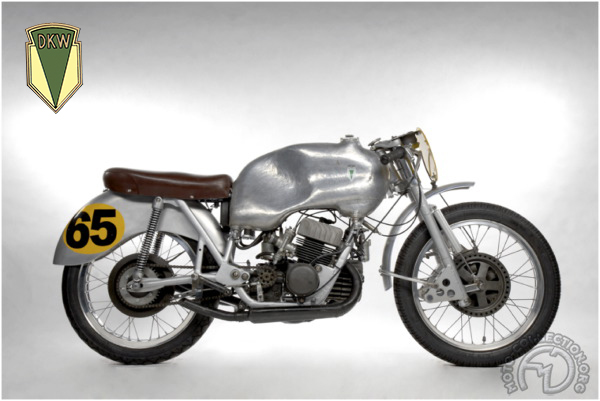 DKW's fundamental place in the development of the two-stroke engine is indisputable. Nevertheless, when the marque pulled out of racing at the end of 1956, the promise of its three-cylinder racer was still largely unfulfilled, with only two third-place results in the 1955 and 1956 World Championships to its credit.

Established in Ingolstadt, since the original factory at Zschopau had fallen under Russian control at the end of WWII, DKW unveiled its new 350cc three-cylinder racer early in 1952. The unorthodox layout, with two inclined cylinders and one horizontally disposed "working cylinder," was intended to avoid the disadvantages of rotary valves.

Though the machine was incredibly light (200 lb), power output (31 hp) and reliability were initially questionable. Up to 1954, its career was a disaster. The DKW was outclassed in terms of sheer speed and its frame was prone to break. In 1954, its development was taken over by Helmut Gorg, who boosted power output by 25 percent, with a fairing developed in a Munich wind-tunnel. The frame was reinforced, the telescopic front fork was replaced by a leading link unit inspired by that of the Guzzi, and huge hydraulically operated magnesium brake drums filled the wheels. But the DKW had peaked too late. In 1956 the factory announced that it could no longer meet the prohibitive cost of racing.

The three-cylinder DKW 350 project took too long to come to fruition, though il foreshadowed the layout of a future generation of racers.