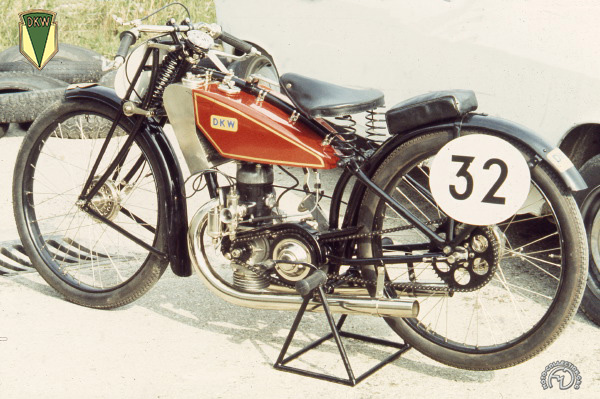 A trump card Â– the pumping-piston

In 1924, DKW built its first racing two-stroke, a 175cc water-cooled three-speeder with a new frame designed for track work. It was followed by a 250 of similar design, the ORe.

The ARe 175 and ORe 250 engines owed their extraordinary performance to a brilliant invention by the marque, a supreme maker of two-strokes. It was a pumping-piston with a very short stroke mounted beneath the engine that compressed the fuel/air mixture in the crankcase before it was transferred into the upper cylinder. In 1929, the power output of the 175 was 12 hp, while the 250 developed 17 hp in 1930.

This engine arrived at the peak of its development the following year with 18.6 hp at 5300 rpm, equivalent to the astounding output of 75 hp/liter. It would have been difficult to obtain a greater output from this type of engine with its almost symmetrical intake and exhaust timing, which made the pumping-piston practically useless at low and middle regimes. DKW subsequently built a 350 using two coupled ARe 175cc engines, which was re placed, after several races, by the 500 PRe. The success obtained in racing with these DKW engines marked the start of two-stroke competition achievement. The two-stroke would come to dominate all forms of two-wheeled motor sport. The ORe 250 had many successes on road and track between 1927 and 1929. It also won the 1929 Targa Florio ridden by Geiss, while Henkelmann became Champion of Europe.

Clearly visible beneath the crankcase is the stumpy piston pump, which amounted to a very efficient form of supercharging.