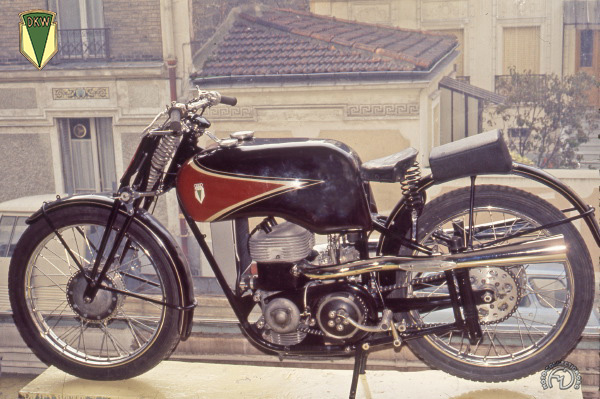 DKW, whose works machines were famous, launched an "over-the-counter" version of these formidable racers at the 1935 Berlin Salon. It was mechanically close to the honor-laden works UL racers, but its cycle components used parts taken from production machines: tank, frame and pressed-steel fork from the SB 500.

Two Pistons for a Single

The frame of the SS was redesigned in 1937. The best way to tell the works and "client" racers apart was by their color schemes: gray and blue for the UL, black and red for the SS. Apart from that, the engine was faithful to the guiding principles of DKW, the world's leading two-stroke specialist: a split-single with a common combustion chamber for two bores, and an extra compressor piston.

The SS had an outstanding career, which continued after WWII and was sustained by the successes of the works UL racers, including victory in the 1938 Lightweight TT (at a record 74.78 mph, a figure not beaten until1950) plus the Championship of Europe by the redoubtable Ewald Kluge. The UL was developed into the ULD, which could be distinguished from the SS by its rotary intake valve. The 1939 SS had twin carburetors mounted at the rear of the cylinder between the exhausts rather than at the front feeding into the cylinder sides. Maybe 200 examples of the 250SS were assembled between 1937 and the outbreak of WWII, with perhaps 50 of the rare 350SS built during 1939.

The 25055 was the finest client-competition racer around before WWII; it was also one of the noisiest, not to mention the thirstiest!